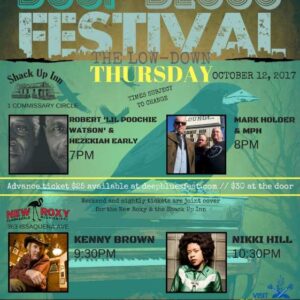 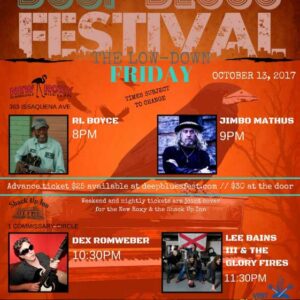 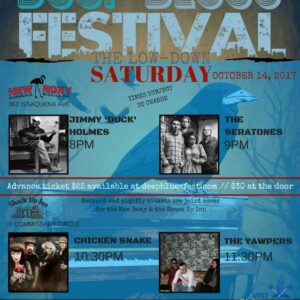 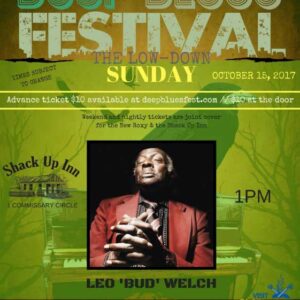 (Clarksdale, MS) – A decade in, Clarksdale’s Deep Blues Festival boasts its biggest, baddest lineup yet with heavy sounds from half a dozen Southern states — including Louisiana, North Carolina and, of course, Mississippi. The promised land.

“These are acts that can rock any house, anywhere, any time, but to see them all together at such post-apocalyptic venues as the Shack Up Inn and New Roxy makes Deep Blues Fest an unbelievable music fan experience,” said festival co-organizer Robin Colonas. “Every year is different. Every year is legendary. But this one is 10 years in the making, and it shows.”

“I mean, damn. This year’s fest runs the gamut from Mississippi bluesmen in their 80s to the grittiest rock ‘n roll you can imagine from all around the South,” noted publicist Roger Stolle. “Reading up on the acts, one was described as ‘pandemonium with a conscience’ and another as ‘following the spirits of their ancestors.’ Either quote could also describe this festival.”

This year’s Deep Blues Festival rocks from Thursday, October 12 through Sunday, October 15, 2017. It encompasses two “official,” ticketed indoor venues plus at least four free busking stages. In total, over 50 acts are expected to perform in conjunction with the festival. The 2017 Deep Blues Festival $75 weekend pass offers the best deal. The pass acts as a “joint cover” and gets you into the festival’s two main venues (New Roxy and Shack Up Inn) for three nights plus Sunday afternoon — October 12-15.

“Our main venues are as unreal as some of the acts that play them,” according Colonas.

The Shack Up Inn’s stage is bolted into an old cotton gin, and the New Roxy is a two-stage venue carved out of a long-abandoned old movie theater — half covered and half open to the heavens.

From Thursday through Sunday, there will also be free daytime performances at places like Shacksdale (Jeff Norwood Memorial Stage with Cedell Davis, Robert Kimbrough and others), Delta Blues Alley Café (Busking Stage I), Cat Head Delta Blues & Folk Art (Busking Stage II) and the Rock & Blues Museum (Busking Stage III). Plus, Clarksdale already features live music 365 nights a year at its blues clubs and juke joints, each with their own cover charges at the door.

Deep Blues Festival also offers the unique opportunity to join the DBF family and become part of this epic event. Fans who become “Benefactors” add the extra financial support needed to keep this such a world-class event. As a thank-you, the fest gives Benefactors first dibs on accommodations at the world-famous Shack Up Inn and exclusive access to the Benefactor’s Ball at the Delta Blues Alley Café juke joint — a special music event that is only for Benefactors.

This is above and beyond the Weekend Pass. Buy your pass first, and then become a Benefactor.

“We get some folks who become Benefactors even if they can’t actually attend the event,” said Colonas. “They just love what we’re doing. Now, those are music fans!”

In 2007, BBQ master Chris Johnson held the first Deep Blues Festival in a field just outside of the twin cities — Minneapolis-Saint Paul — well north of the Delta. While Johnson is no longer an active organizer, he is still a big fan. Considering Mississippi to be the festival’s musical and spiritual home, he hand-delivered the fest to Clarksdale four years ago.

Greenville-Washington County CVB is rollin’ on the river all right! International Conference on the Blues Oct 1-3