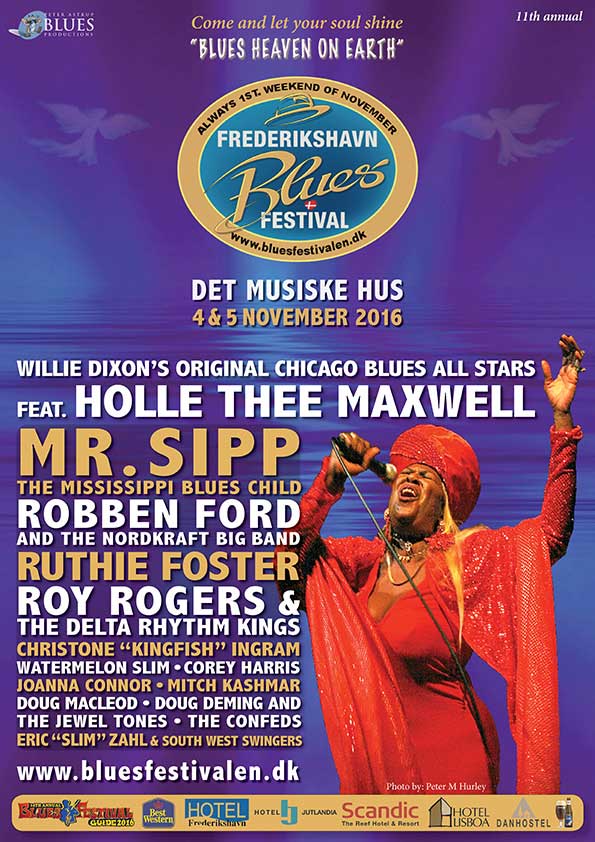 (Frederikshavn, Denmark) – The Frederikshavn Blues Festival will be held November 4–5, 2016 in Frederikshavn, Denmark. During this first weekend it will be time to enjoy “Blues Heaven on Earth” with an amazing international lineup of unique, world-class celebrities and Grammy award-winning performers from the U.S. and around the globe. As usual “Det Musiske Hus” in Frederikshavn provides the backdrop for the festival’s intimate atmosphere. Blues, rock, gospel and soul lovers, get ready for the 11th year of one of the world’s most respected and prestigious blues festivals, featuring a marvelous and rich music program.

Holle Thee Maxwell, “The Black Blonde Bombshell,” is top of the bill. Holle has a six-decade career behind her. As a teenager she studied classical piano and vocal education at prestigious Roosevelt University and Juilliard School in New York. In 1977 she replaced Tina in Ike Turner’s band and was the lead singer for the next eight years. She was also Hammond virtuoso Jimmy Smith’s long-time singer – the only singer Jimmy ever used. This time, Holle is backed by Willie Dixon’s original Chicago Blues All Stars. These cats have worked together for more than 40 years. The legendary bass player Willie Dixon (July 1, 1915 – Jan 29, 1992) is, for many, “The Father of The Blues,” and the songwriter who penned many of the blues classics we know today.

Musician Magazine has named Robben Ford as “one of the 100 greatest guitarists in the 20th century.” Robben has been Grammy nominated five times. His impressive CV includes among others 8 solo recordings, 7 albums with his regular bands and a wide range of recordings as guest guitarist. In addition, he has toured and played with names like Miles Davis, George Harrison, Bob Dylan, Bonnie Raitt and John Scofield. Last time Robben was in Frederikshavn was in 2011 with the super group “Renegade Creation.” In 2013 Robben toured Denmark with the Nordkraft Big Band, so all of the 17 Big Band members know they will have a wonderful swinging time when they kick-start the festival on Saturday afternoon.

“Phenomenal” Ruthie Foster from Texas started singing in a gospel choir at the age of 14 and now she is a stylish, bluesy gospel queen with a fascinating voice that gets right under your skin. She just received a remarkable 4th Grammy award as “Blues Artist of the Year,” having been nominated in each of the last six years. Ruthie also holds the official world record for selling the most CDs after a concert, having sold over a staggering 1,000 copies at the Canadian Folk Festival.

The American slide virtuoso and producer Roy Rogers is a familiar face to Danish music lovers and he has long been a well-established, world-class name. He is a nine-time Grammy nominee and has won the award “Best Blues Guitarist of the Year” several times. Rogers has published 16 CDs and also has worked as producer for, among others, John Lee Hooker (for his five last CDs), and Bonnie Raitt, and Miles Davis.

The 17 year-old wonder kid from Clarksdale, Mississippi, Christone “Kingfish” Ingram, is already a phenomenon in blues guitar world. He has performed at the White House for President Barack and Michelle Obama. He has toured Europe extensively, at festivals in Switzerland, the Netherlands, Germany and France. Big in the social media world too, Kingfish has appeared on TV shows which have received 250,000 likes on Facebook and his YouTube videos have gathered a huge 10 million views.

Watermelon Slim (Bill Homans) has been playing blues for 35 years. He is an interesting character with a rich and varied history of countless “odd jobs” including mortician, truck driver and soldier in Vietnam. Later on, he became a watermelon farmer! He is a member of MENSA (the club for people with high IQs) and has two university degrees, in history and journalism. Slim has won a Blues Music Award for “Best Blues Album of the Year” for the album The Wheel Man), and also won “Best Blues Band of The Year.”

Corey Harris, together with Keb’ Mo’ and Alvin Youngblood Hart, represent the absolute top of younger American roots musicians. Corey salutes the Mississippi delta style where man and a guitar can fill a room with joy. Many people will know him as the central figure in the Feel Like Going Home part of Martin Scorsese’s famous movie series The Blues which he recorded in Mississippi and Mali.

Joanna Connor is the hardworking slide-mama from Chicago. She signed her first recording contract in 1989 and toured in Europe an impressive 32 times between1990-1999. Now that her family is grown, she has resumed touring life. One of her YouTube clips from 2014 has been seen more than 850 000 times, which shows how many blues fans still remember this powerful guitarist. The brand new album Six Strings Stories is her first release in 14 years and Elmore Magazine wrote “Her incendiary slide playing is absolutely breathtaking.”

Mitch Kashmar, a double Blues Music Award nominee and blues harp virtuoso for 35 years, has also been one of the most soulful and powerful blues singers in the industry. He began in early 80`s in Santa Barbara, California with The Pontiax, who appeared at the Djurs Bluesland Festival back in 1993, and the energetic Mitch has played everything and with everyone since.

Doug Macleod has won two Blues Music Awards last year: “Acoustic Artist Of The Year” and “Acoustic Album Of The Year.” His songs have been recorded by Albert King, Albert Collins and Joe Louis Walker. Doug is a musician’s musician and he is rightly considered as one of the great torch bearers carrying on the tradition of acoustic blues. Doug Macleod’s warm voice, his intimate style; his knowledge, humor and charming stage performance, has made him welcome back to Frederikshavn for the third time.

Doug Deming & The Jewel Tones, feat. Steve Guyger Eastside Detroit native Doug Deming, now hailing from Florida’s Gulf Coast, has garnered widespread attention for his deft guitar work and memorable songwriting. With a nod to the likes of T-Bone Walker and Charlie Christian, as well as Luther Tucker and Robert Jr. Lockwood, Doug leaves his own mark whether swinging on the big jazz box, or playing straight up blues on the solid body Fender guitar. All this with blues-harp virtuoso Steve Guyger’s magic tricks too!

Eric “Slim” Zahl & the South West Swingers are the Norwegian winners of the prestigious European Blues Challenge 2016. These Stavanger musicians did really kick ass when they amazed everybody and won against 20 other top European bands in the Italian city Torrita di Siena, this spring.

The Cornfed’s style is based in the blues of the 30’ies and 40’ies, which has been the main influence on the 12 original songs from their debut album The Cornfeds released in the summer of 2016. An album that achieved nomination for a Danish Music Award in the category “Blues Album of The Year.”

Festival organizer Peter Astrup says in Blues.dk: “11 YEARS – WOW that’s real commitment to the Blues. That is why you will discover amazing performers to match former memorable concerts with prominent names such as Johnny Winter, Gary Moore, Dr. John, Kenny Wayne Shepherd, and most of Fleetwood Mac, not to forget over 100 other bands that have visited the festival during the past 10 wonderful years.” Peter continues: “The great music, the amazing atmosphere and the intense experience for the audience of about 1 000 blues fans have always been the trademark elements of the festival. This year will be packed with intense blues, rock, soul, boogie-woogie and gospel in all sorts of styles, so even the pickiest fan will have to surrender.”

Once again it’s possible to buy a combo ticket (ticket and accommodation incl. breakfast) in neighboring towns. All hotels in Frederikshavn are sold out, so move fast!

Watch music videos, listen to songs and discover more about the artists, accommodations, transport and tickets at the festival homepage.

Tickets can be bought online (tickets and accommodation) www.billetlugen.dk (tickets only)