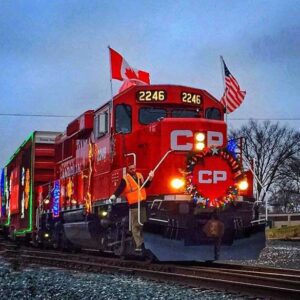 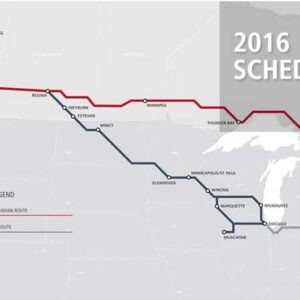 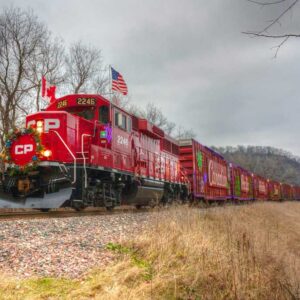 (US & Canada) – Two trains will operate coast-to-coast under the Holiday Train banner, with approximately 150 shows held in November and December. The train that operates primarily through the U.S. will launch in the Montreal area on Nov. 25, while the all-Canada train’s first shows will come a day later, also in Montreal. The U.S. train will complete its final shows in Saskatchewan on Dec. 15, and the final show of the tour will take place Dec. 17 at Port Coquitlam, B.C.

At each stop on the Holiday Train’s schedule, the beautifully decorated and lighted train pulls up and one side of a box car opens to reveal a music stage with the band ready to entertain the crowds who flock to see it each year and also bring along food to donate to local food banks.

Canada’s six-time Juno Award-winning blues singer/guitarist/songwriter Colin James will perform at all Holiday Train stops in the US on the 18th Canadian Pacific holiday train along with Canadian country music artist, Kelly Prescott.

The Holiday Train has become a highly-anticipated annual rite of passage for families all along the route stretching from Canada down to the United States & brings together children of all ages to celebrate the season, bringing joy and goodwill as swell as supporting local community food banks and raising awareness. At each stop along the way, Colin James will perform a 30 minute set of music that includes both holiday favorites as well as his own songs.

As in years past, “We are very excited about this year’s CP Holiday Train and are encouraging all event attendees to bring healthy, nutritious food items to the shows,” said Pam Jolliffe, Interim Executive Director, Food Banks Canada. “For the last two decades, CP has played an integral role in raising essential food for the holidays and in raising awareness of hunger-related issues.”

Every pound of food and dollar raised at each stop stays with the local food bank to help feed those in need in that community.

First-time stops this year include Olds, Alberta and Canoe, B.C.

To watch an informative video about the Holiday Train click here.