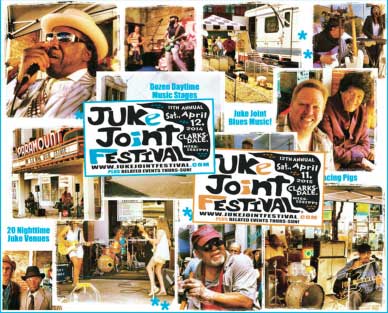 Our 11th annual, 2014 edition of Juke Joint Festival is dedicated to all of the late, great Delta blues performers / supporters who have passed away during the past year — including Arthniece “Gas Man” Jones, Willie “Rip” Butler and James “T-Model” Ford. RIP.

Juke Joint Festival is “half blues festival, half small-town fair and all about the Delta.” It celebrates our past AND living history by presenting over 100 blues acts during the course of the weekend — most of them Mississippi or Southern, many in their 60s, 70s, 80s or 90s! This is the real-deal Mississippi blues festival that you’ve read about. It is like no other in the world.

During the daytime, you can expect a dozen small stages with authentic blues. At night, we feature all of our surviving juke joints, blues clubs and other indoor stages — last year included 21+ venues. (Last year also featured the world-premiere of the new Mississippi blues film, “We Juke Up In Here!”)

There’s exciting related events on starting at 6pm on Thursday, April 10th and carrying through the night of Sunday, April 13th. (Related events on that Sunday include the always free and fabulous Cat Head Mini Blues Fest at 10am.)

The home of this much acclaimed festival? Historic CLARKSDALE, MISSISSIPPI — just 90 minutes south of the Memphis International Airport and once home to such blues greats at Son House, John Lee Hooker, Junior Parker, Ike Turner, Muddy Waters, Pinetop Perkins, Earl Hooker, Lil Green, Big Jack Johnson and many, many others.

What is the JUKE JOINT FESTIVAL? It’s a positive event for everyone in Clarksdale. It’s good for families, businesses, musicians and tourists alike. The festival itself combines an international “blues festival” with a community-minded “small-town fair,” creating a strong and memorable event like no other in the universe. It’s organized by the Clarksdale Downtown Development Association (CDDA) and staffed by enthusiastic volunteers. This “half small-town fair, half blues festival” does more than simply entertain attendees — though it definitely does that, too! It aims to educate and enlighten native Deltans and blues tourists alike through a series of performances, exhibits, and presentations involving music, art, storytelling, film, and children’s events. The event mixes visitors with locals and showcases the economic power of cultural tourism, turning average Deltans into ambassadors for the region.

The 35th Blues Music Awards J.J. Thames :: TELL YOU WHAT I KNOW