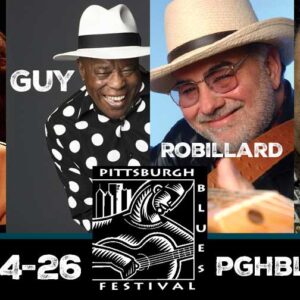 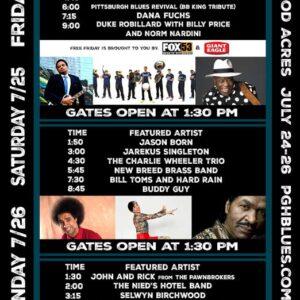 PITTSBURGH, PA – Warm summer nights, great music and something for the whole family, The Pittsburgh Blues Festival, a benefit for Greater Pittsburgh Community Food Bank, has become a summer favorite for two decades and, 2015 will be no different.

Gates opens Friday, July 24, 2015 at scenic Hartwood Acres (Hampton, PA) with headliner The Duke Robillard Band. Saturday night features Buddy Guy and the event closes on Sunday night with performances from Marsha Ball and Bobby Rush. In between, a host of local and national acts will fill two stages.

“This is going to be the most diverse, exciting Blues Festival we’ve had in a long time,” said Ron “Moondog” Esser, chair of the Blues Festival committee. “This year’s performers will merge legendary artists with newer groups that are establishing themselves on the scene resulting in a fresh mix of traditional and modern music.”

The star-studded headliners represent an exciting mix of blues entertainment spanning many genres. Award-winning blues guitarist Duke Robillard has been praised for his ability to “play across the spectrum of blues” as well as his dedication to his craft. He has been nominated for the B.B. King International Artist of the Year award seven times and has collaborated with a large number of musicians including Tom Waits, Bob Dylan, Maria Muldaur, Dr. John and more.

Buddy Guy, one of the world’s leading bluesmen, has been “keeping blues alive” since 1957. A Rock and Roll Hall of Fame inductee, Guy has worked with artists such as Steven Tyler, Kid Rock and Keith Urban as well as having been a driving influence for musicians such as Jimi Hendrix, Eric Clapton and Stevie Ray Vaughan.

On Sunday, singer/pianist Marcia Ball headlines alongside Bobby Rush. Ball’s unique vocals feature a New Orleans and Gulf Coast R&B fusion that has helped her gain a loyal and steady following throughout a span of three decades. Rush’s performances are known for featuring the grit, grind and soul that’s been the blues innovator’s trademark since the 1960s, when he stood shoulder to shoulder on the stages of Chicago with Muddy Waters, Howlin’ Wolf, Little Walter and other giants.

“While the focus of the Blues Festival will be the great music it has to offer, the organizing committee has gone out of its way to make sure that there is fun for all ages,” said Food Bank Director of Community Engagement Alyssa Jurewicz-Johns. “This year’s event will feature food trucks offering a variety of dining options, local beer and liquors, and children’s activities that are fun and engaging.”

The Pittsburgh Blues Festival feeds more than the soul

In 20 years, the festival has raised over 100,000 pounds of donated food and $2 million for Greater Pittsburgh Community Food Bank.

Friday’s admission is free with a bag of nonperishable groceries. Advance tickets are $38 for Saturday and $20 for Sunday. Two-day weekend passes are also available.

For more information on tickets, volunteer opportunities with the Blues Festival or the Food Bank, visit www.pghblues.com.

Blues On the Chippewa Festival, 7.31-8.2 adds Shaun Murphy & Eric Gales to lineup! Dig in to Decades of Recordings, Photos and more from folklorist William R. Ferris