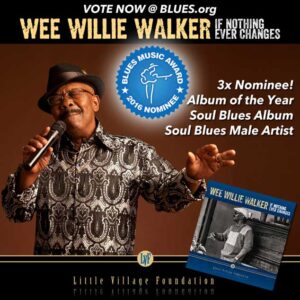 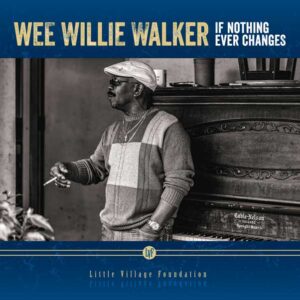 Already a member of the Blues Foundation? Then vote for this very deserving national treasure, Wee Willie Walker. If you are not a member please join @ blues.org and Vote Willie!

Classic soul-blues singer Wee Willie Walker vaults to the front of public attention with three Blues Music Awards nominations for If Nothing Ever Changes CD.

MINNEAPOLIS, MN – In one of the most amazing and powerful music stories of the past year, under-recognized classic soul blues singer Wee Willie Walker, who was previously best-remembered for a few 1960s obscure singles for Goldwax and Chess Records, released a new album, If Nothing Ever Changes, which has captured the hearts and minds of blues and soul music fans around the world. That led to his being nominated in three major categories by the Blues Foundation for the upcoming Blues Music Awards, to be held in Memphis on May 5: Album of the Year, Soul Blues Album and Soul Blues Male Artist. Members of the Blues Foundation can vote at www.blues.org, with voting open until the end of February.

To stream the music on the If Nothing Ever Changes album, click on this link:

When Blues Music Magazine recently announced their Top 10 Picks for 2015 from six of its editors, four of the six – including Editor-in-Chief Art Tipaldi – featured Wee Willie Walker’s CD on their lists. Additionally, the nationally-syndicated radio show, “Elwood’s Bluesmobile,” has chosen Wee Willie Walker’s track, “Hands of Time” as Elwood’s Blues Breaker to air the weekend of February 20-21.

Reviews of If Nothing Ever Changes have been over the top in their praise of his long-overdue talent recognition:

“If enough of the right people hear If Nothing Ever Changes, Wee Willie Walker’s world will change, and he will become the award-winning, highly sought-after soul/blues singer he has deserved to be since the 1960s… Not enough good things can be said about this singer’s comeback record.” – Steve Sharp, Living Blues

The catalyst for the recording of If Nothing Ever Changes came when multi-Blues Music Award-winning singer/harmonica player Rick Estrin was introduced to Walker by Willie’s manager, Julia Schroeder, and instantly realized that this was the voice he’d remembered from hearing on some Goldwax and Chess 45s in his collection. And when Estrin heard how strong and vibrant Walker’s vocals still were, the idea was hatched, along with all-star guitarist Kid Andersen, to record a new album on Walker. During the sessions recorded with a host of A-list West Coast musicians, keyboard player Jim Pugh, himself a veteran of scores of major blues and roots recordings (Robert Cray, B.B. King, Etta James) and live dates (JohnnieTaylor, Little Milton), mentioned his idea of creating the Little Village Foundation to record artists such as Walker. As Estrin then states in the album liner notes, “We found our platform for launching this record into the world. All we wanted to do was to make music with Willie, and do what WE could to get him heard in the setting he deserves. Nobody was thinking about getting paid, it was all for the common love of this beautiful and near extinct music.”

Willie Walker was a member of the gospel group the Redemption Harmonizers when he left Memphis and headed to Minneapolis in 1960. With the Twin Cities having been his base of operations since then, Walker proceeded to work with a number of area gospel groups, before subsequent visits back to Memphis in the ‘60s landed him recording dates with Goldwax Records. He cut nine sides for Goldwax, which released some on their imprint and also leased four of them to Chess Records subsidiary, Checker Records. Some of his singles included “You Name It, I’ve Had It” and “From Warm, to Cool, to Cold,” which were recognized as gems of soul music, but not widely released and known only to true music aficionados.

Before recording his latest album, Walker had recorded three albums over the past 10 years backed by hot local Twin Cities soul/R&B band The Butanes, which though with limited distribution and publicity, still garnered critical acclaim and kept Walker and the band busy playing local and regional dates.

If Nothing Ever Changes, his Little Village label debut, brings Willie Walker to the forefront with the support of some marquee names of West Coast blues and soul serving as his backing band. Walker described the resulting recording sessions as a “houseful of love. I didn’t know them, but they all knew me and immediately we were like family,” he recalls. With Estrin producing and Kid at the helm, the artists assembled for the sessions represent some of the strongest talent of today’s West Coast Blues scene: Jim Pugh – keyboard player and founder of the Little Village Foundation; Rusty Zinn – a guitarist whose resume includes recordings with Kim Wilson and Sly Dunbar; Robert Welsh, guitarist with Elvin Bishop; bassist Randy Bermudes of The Fabulous Thunderbirds and, vocalist Curtis Salgado, whose group The Nighthawks inspired John Belushi to create the Blues Brothers – just to name a few.

What We Do: We bring music from next door to the world
How We Do It: By discovering, recording and producing music that wouldn’t otherwise be heard
Why We Do It: Diverse music builds empathy