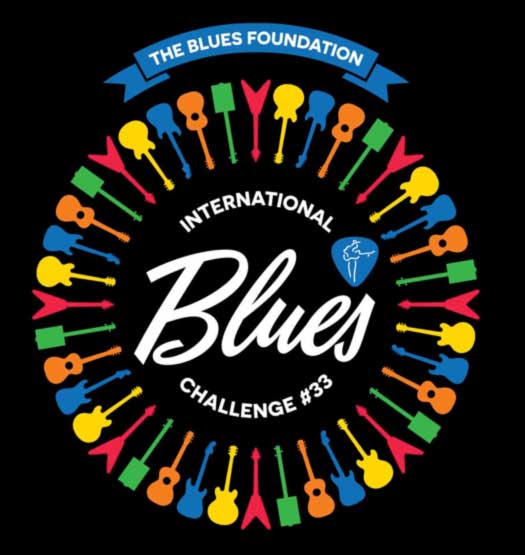 Over the past thirty-three years, one of The Blues Foundation’s key events, the International Blues Challenge, has blossomed into an industry-leading annual showcase of the best new talent the genre has to offer. What began in 1984 as a handful of acts displaying their talents today stands as the world’s largest gathering of blues musicians. The IBC makes careers, forges relationships between artists and industry veterans, and unites blues fans in their love for the music.

The 14 tracks on this CD, the result of a partnership between The Blues Foundation and Frank Roszak Promotions, were drawn from this year’s Solo/Duo division and Band division finalists. First Place Band winner Dawn Tyler Watson’s gospel-infused “Shine On” kicks off the compilation in powerful fashion. “Let’s Hear Some Blues,” by Johnny Fink & The Intrusion, is a down-and-dirty shuffle you can’t help but sing along to. Randy McQuay’s “Til I Get To Memphis” features white-hot slide guitar and an impassioned vocal, while Brody Buster’s One Man Band takes blues storytelling into the future on “2029.” Next up is First Place Solo/Duo winner Al Hill with “Don’t Dig Today,” a deeply felt piano blues. It’s followed by The Sobo Blues Band, whose “Catfish Boogie” builds to a pounding climax punctuated by an irresistible guitar riff.

“I Don’t Have Proof,” by Ruth Wyand & The Tribe Of One, offers a new twist on the time-tested blues topic of infidelity, while The Souliz Band Featuring Sugar & Spice looks at the happier side of romance on the ebullient “Good Lovin (Hot & Fresh From The Oven).” Felix Slim invokes the downhome simplicity of front-porch country blues on “I Hate You Cause I Love You,” followed by another acoustic artist, Wes Lee, who tells the tale of an escapee running from the law on “Chains That Bind.” Keyboardist Sam Joyner’s “Onions Ain’t The Only Thing” plays with a clever blues analogy over some stinging fretwork, and Rae Gordon & The Backstreet Drivers cook up a tight groove with “Elbow Grease.” Closing out the CD are King Bee, whose “Dangerous” is as hard-hitting as blues-rock gets, and Sugar Brown, who rides off into the sunset with a world-weary howl on “Meet Me In The Country.”

Together, these fourteen wide-ranging artists show why the International Blues Challenge is one of the premier events in today’s blues world.