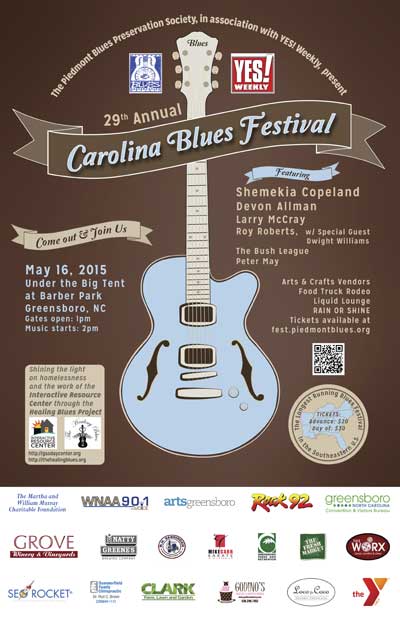 GREENSBORO, NC – Shemekia Copeland and Devon Allman will be among performers on May 16 at the 29th annual Carolina Blues Festival, which will move from downtown Greensboro to Barber Park Amphitheater, 1500 Dans Road, 3 miles east of downtown.

The festival moved because Price-Bryan Festival Park, its previous downtown location, is under construction as the site for the new Carolyn and Maurice LeBauer Park, said Doug Mokaren of the Piedmont Blues Preservation Society, which organizes the event.

The Carolina Blues Festival has the distinction of being the longest-running blues festival in the Southeastern United States, with the Piedmont Blues Preservation Society having produced blues festivals since 1986. Attendees from all over the East Coast come to Greensboro for this annual event, which has been held under a big tent for over 10 years!

Tickets range from $20 general admission to $50 for a blues bundle, which includes one ticket, preferred parking, a T-shirt, and scrip. Advance tickets are available here. Day of show tickets will be $35 at the gate.

Through The Healing Blues Project, musicians created 15 songs from the lives of storytellers experiencing homelessness. They recorded and compiled the works into a CD to raise money for the IRC.

After paying the storyteller, more than $10,000 in proceeds raised by the sale of the CDs and Healing Blues T-shirts has been donated to the Interactive Resource Center. This project is planning to go into Volume 2 of The Healing Blues to continue the momentum of Volume 1, and to continue to bring awareness to the plight of the homeless population. To learn more about The Healing Blues Project, go online here. To hear song samples and/or purchase the CD to help the Interactive Resource Center, go online here.

Gator in Blue in San Diego Latimore to Perform at the Family Festival April 19, 2015, Houston, TX