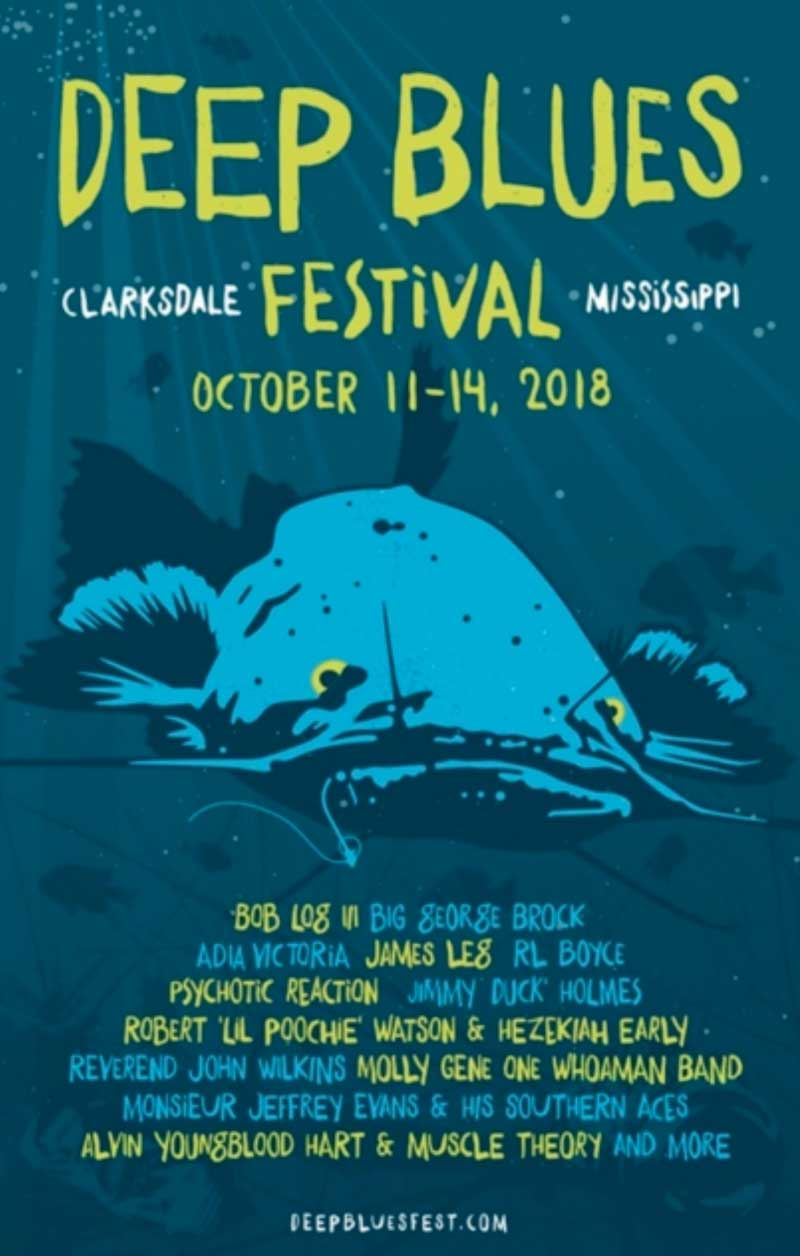 Clarksdale, Mississippi — Deep Blues Festival organizers say that this year’s 11th edition promises to be the biggest and best yet with an emphasis on heavy music rooted in the American Music Triangle. 4-Day Passes for the October 11-14, 2018 festival are selling fast, and with this year’s lineup, it’s easy to see why.

“We run the gamut from young rockers to old souls,” said co-organizer Robin Colonas. “We’ve got the roots and the fruits — blues, gospel, rock ‘n roll. Even Bob Log III.”

As always, the venues are just as amazing and original as the acts themselves.

The Shack Up Inn’s stage rose from the ruins of a rusty old cotton gin, and the New Roxy is a two-stage venue carved out of a long-abandoned movie theater.

​”Oh man, we’ve got the South’s coolest spots for music,” said co-organizer Bill Talbot. “Photographers go crazy. It’s like a Hollywood set — except that it’s all for real. We’re the real deal!”

4 Days That Will Rock Bluestown, USA

Recently voted the “#1 Music City that isn’t Nashville” by the travel experts at Fodors, Clarksdale, Mississippi, is located less than 90 minutes south of Memphis — at the infamous “Crossroads” of highways 61 & 49. It’s been called “Bluestown, USA,” and lives up to its name with live blues 7 nights a week and a dozen festivals per year.

The best way to experience both Deep Blues and Clarksdale is the $75 pre-sale 4-Day Pass available here. It gets you into all of DBF’s official nighttime shows at both New Roxy and Shack Up Inn.

“The 4-Day Passes are on track to sellout, so I’m telling fans not to wait,” said festival assistant Roger Stolle. “DBF isn’t one of those ‘sea of humanity’ fests out in a big open field, it’s more like a secret music party for fans in the know. The stages are intimate, and the tickets are limited.”

Stolle points out that once you’re here, you can also catch free live music on half a dozen daytime DBF busking stages. There’s even a Deep Blues Festival 5K Fun Run/Walk on that Saturday.

And, if ​that isn’t enough, there will be two other annual events happening the same weekend​ as Deep Blues Festival — the Mississippi Delta Tennessee Williams Festival and Cruzin’ The Crossroad​s — so visitors should plan to sleep when they go back home.

​Want Even More? Become A Benefactor!

Deep Blues Festival also offers the unique opportunity to join the DBF family and become part of this epic event. Fans who become “Benefactors” add the extra financial support needed to keep this such a world-class event. As a thank-you, the fest throws the Benefactor’s Ball each year — a special music event that’s only for Benefactors.

Please note this is above and beyond the 4-Day Pass. Buy your pass first, and then become a Benefactor.