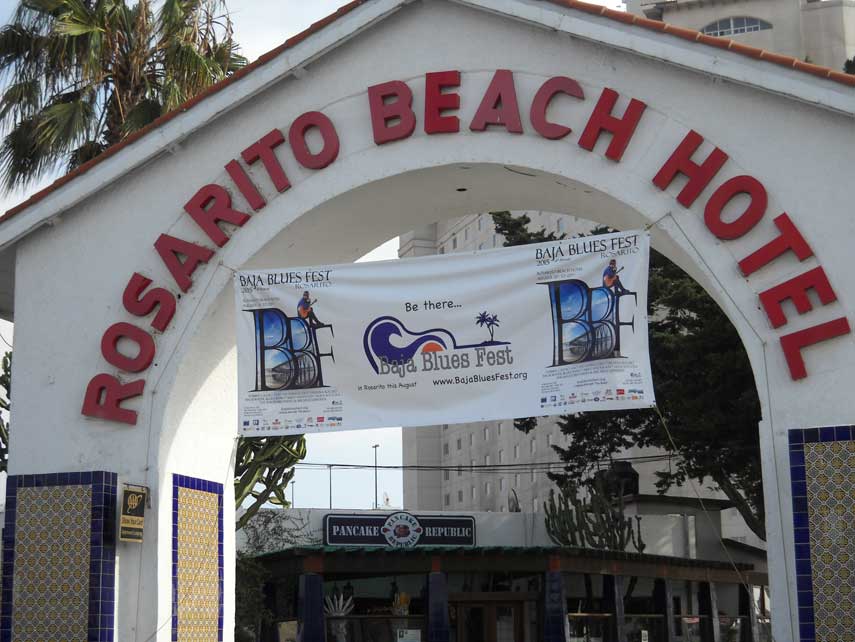 ROSARITO, BAJA, MX – I was lucky enough to be asked to represent the Blues Festival Guide at the Baja Blues Fest at the Rosarito Beach Hotel in Rosarito, Baja, Mexico. This festival is hosted by the Baja Blues Fest Organization and Jackie Alameda (President and Secretary), Joan Swartzlander (Director of Activities), Tom Stewart (Talent Coordinator) and all of their amazing volunteers, know how to put on an event. From the moment we arrived I could tell they knew what they were doing. Everyone was so happy and helpful, from the ladies handing out the Press Passes, the peeps checking in the musicians and all of the employees of the Rosarito Beach Hotel, including the guards out front (who helped us find a taxi).

The venue was beautiful… hard to go wrong right on the beach with an awesome view. The jam on Friday in the Adobe Lounge was packed and the place was rocking. The dance floor was full and the musicians were putting on an amazing show. Everyone was enjoying getting warmed up for the big show on Saturday. Tom Stewart did a great job of getting everyone up and jammin’.

We arrived on Saturday just in time for local Tijuana band, Hola Soy Lola. They have a fresh take on the blues and the band heads up a group called Border & Blues Jam, whose sole purpose is promoting the Blues and reviving the Tijuana music scene.

Next up was Missy Andersen who never disappoints. Her soulful voice and warm lyrics touched the heart of the crowd. She was been nominated for a 2015 BMA and two Blues Blast Awards. Her CD, In the Moment, was also nominated in the Soul Blues Album category.

The Bayou Brothers took the stage next and the foot-stompin’ was soon in full force. With their Cajun/Zydeco blend, they took the audience to Mardi Gras and back and we loved every minute of it.

Michele Lundeen (pictured) joined the The Bayou Brothers on stage and the “Queen of Steam” cast her spell on the festival in her usual flamboyant style. She graced the audience with three amazing tunes and left us all wanting more!

The Backwater Blues Band, host band of the Baja Blues Fest for the 3rd year was up next. They are well known up and down the west coast. Established in 1996, they have earned the reputation of being one of the hardest working bands in the blues world ad that showed on stage. They had the crowd running for the dance floor.

Deanna Bogart joined The Backwater Blues Band on keyboards and saxophone and her award winning talent took the music to another level. Her blend of styles, which she calls “blusion,” has earned her three consecutive Blues Music Awards including Horn Instrumentalist of the Year for 2008, 2009 and 2010 and an endorsement contract with Rico Reeds. She has won, at last count, more than 20 Wammies, the music awards for the hotly contested Washington, D.C. region.

Tommy & The Painkillers headlined this festival and what a great way to close out the day. They hit the stage with their energetic and biting tunes. Tommy has received 6 Blues Music awards and an additional 12 nominations. The crowd reaction showed how much he is loved by the blues community.

Saturday night festival closed with an awesome fireworks display ending an amazing day at the 4th Annual Baja Blues Fest. We weren’t able to attend the post jam on Sunday afternoon but I heard it was packed and rockin’.

I don’t know about everyone else, but I am making my plans to attend next year right now.