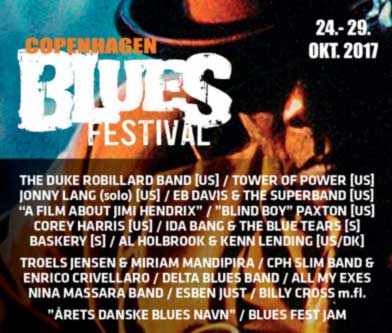 (Copenhagen, Denmark) – It’s autumn, and once again, it’s time for “Blue Copenhagen.” From now until Sunday 29th the Blues is the name of the game, and we’re inviting all blues fans to visit the city’s many clubs and venues for a week of world class international blues, as well as some of the best homegrown blues.

FESTIVAL PROGRAMME
The Blues is many things, it’s tradition, but also innovation and evolution. The festival is famous for its presentation of The Blues in a fine balance between tradition and new expressions, and our constant musical ambition is to cover all styles of blues and to present a programme of the highest possible international level.

So, as always, you’ll find the seasoned blues veterans performing alongside some very talented young artists, who will carry the torch into the future.

Must see international acts this year:
– Corey Harris – Thursday at Mojo. “The old bluesmen would have tipped their hat to him.”
– The Duke Robillard Band – Thursday at Bartof Station. One of the greatest blues guitarists in the world today. Super tight blues with a touch of jazzy guitar licks
– EB Davis & the Superband – Friday at Bartof Station. “Ambassador of the Blues” and his amazing, European based, top class, soul and blues cats.
– Baskery – Mojo Friday. Americana music – ”Banjo-punk”, ”mad-country” or ”killbilly”
– Ida Bang & the Blues Tears – Saturday at KU.BE, Frederiksberg. One of Sweden’s most exiting young and up-coming blues-rock acts
– Enrico Crivellaro – with Cph Slim, at several clubs around town.
– Miriam Mandipira – last year’s blues award recipient, also performs at several clubs around town.
– Jonny Lang – Sunday – Amager. Solo tour with his new CD, “Signs”