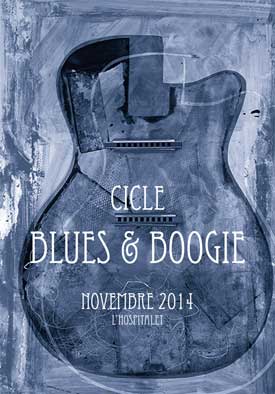 November wears black music in L’Hospitalet with the ninth edition of the series, Blues & Boogie. The festival runs from November 7 through Saturday 29 and includes a total of 15 performances, exhibitions, lectures and presentation of monographs of blues. The event is sponsored by the Centre Cultural Collblanc and The Blues Society of Torrassa, Barcelona (Spain).

This year the international presence in the festival is larger with very prominent names like Slam Allen, American guitarist and great blues singer, who, in recent years has been the right hand of blues legend, James Cotton. It will be the band’s first visit to Spain.

Nathan James, a master of Californian roots and blues and will perform songs off of the two albums he’s released this year, Hear Me Calling and Natural Born That Way. Nathan is a former winner of the Blues Foundation’s International Blues Challenge duo division. He was also nominated for a Grammy this year for the album Remembering Little Walter, recorded with other legends such as Charlie Musselwhite, Billy Boy Arnold, James Harman, Sugar Ray and Mark Hummel.

Finally, the cycle returns to Blues & Boogie night program, Boogie Woogie Jubilee, where pianos are the protagonists and the cheerful and festive music that follows this style. The players of this portion are Fabrice Eurly, whom the French call the new Jerry Lee Lewis; 19 year old Luca Sestak from Germany who is astonishing to the world and is one of the most important figures in current boogie woogie; and Lluis Coloma, our most international pianist and host of this concert.

In addition to this international participation, Ciclo Blues & Boogie will present a series of “CONCIERTOS ÚNICOS” at the Depo festival hall. The first, Thursday, November 13, is Victor Barceló, a young, 19 year old harmonica who rubs shoulders with the best on the national blues scene and is destined to be one of the greats in the future. David Giorcelli, one of the historic pianists, and currently leader of the formation Wax & Boogie, performs with Barceló. This will be a special night where experience and youth come together to offer a unique performance. Another unique show, “Una Bluestraña Pareja,“ is a surreal experiment presented, for the first time together on one stage, two of the most histrionic and wacky characters on the current scene. MA Lonesome and Alan Bike are synonymous with good humor, madness and above all a bizzarrismo, interactive blues show. Closing these unique concerts is the duo of Cita a Ciegas, who offer us soul caramel in an intimate format of two acoustic guitars and the wonderful voice of Jonnathan Herrero… hypnotic music. The Depo festival Hall was the birthplace of the national underground movement, and is a favorite Indie temple for more than 27 years. It features black music programming called Depo In Black and is the link with Ciclo Blues & Boogie.