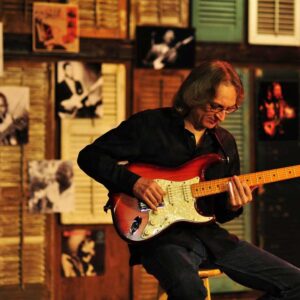 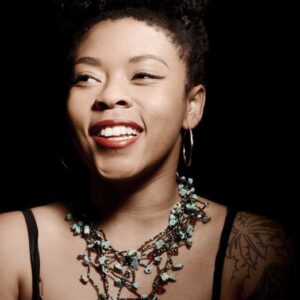 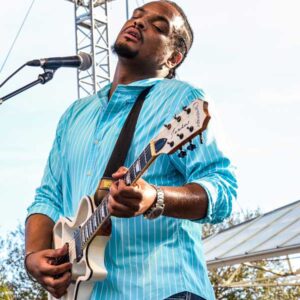 Sonny Landreth was born in Mississippi and raised in Louisiana, and his music incorporates the best of those two musical worlds. Over more than 40 years, he has released 12 albums, and toured the world many times, both as a solo act, and with such headliners as Eric Clapton, John Hiatt, Jimmy Buffett and Joe Satriani. A major reason for his far reaching success is his unique slide guitar technique. Sonny wears the slide on his little finger, allowing him to play individual notes and even chords with his other fingers behind the slide.

Sonny’s latest album, Bound by the Blues, was released in June. It’s a bold, big-sounding collection of recordings that take him back to the simple but powerful blues form. The arrangements for many of the albums tracks were born on the road. As such, they form the core of an amazing, unique and fresh live show that is not to be missed. Watching Sonny perform “Key to the Highway” gives a glimpse of what to expect when he closes Saturday night.

Opening for Sonny is North Carolina’s Nikki Hill, one of the most dynamic young singers today. She has a voice with raw rock and soul dynamics mixed with the strength, passion and honesty of blues shouters of the past. Add incendiary blues guitar slinger, and husband, Matt Hill, and rhythm section Ed Strohsahl on bass and Joe Meyer on drums, and the resulting band is unforgettable. Hill and her band have been touring extensively following the independent release of her debut album Here’s Nikki Hill in 2013, leaving jaws on the floor along the way.

With a new album due in 2015, Nikki’s live show has expanded beyond her debut full length, and she’s excited to have people hear her new songs. “It’s a kick-ass record,” she said, “I think people are going to dig it. It’s got a great vibe to it and, most important, it sounds like us.” (L. Kent Wolgamott, Lincoln Journal Star)   So get ready for Nikki’s no-filter energy and explosive live show, a taste of which can be seen in her recent performance of “Number Nine Train.” If you haven’t seen her yet, prepare for your ‘whiplash moment’ — you’ve been warned!

Born in Mississippi, Jarekus’s musical journey began in gospel, traveled through the blues, took a timeout for basketball, and paused briefly in rap before returning to the music of his Mississippi heritage. Along the way, he created a thoroughly modern, masterfully updated take on the blues. His new wave of blues is captured in Refuse to Lose, and in his live performances, such as this rendition of the title track. On Saturday, see why “Jarekus Singleton is destined to be the next big name in the blues world.” (Blues & Rhythm Magazine)

In 2015, the International Blues Challenge continued to showcase the best blues talent from around the world. And 2015’s first place band winner, Eddie Cotton, Jr., takes the stage right before Jarekus. Eddie grew up in Mississippi singing and playing gospel music at church, studied music theory at Jackson State University, and served as minister of music at his father’s church. He electrified the IBC crowd, and he will do the same in Daytona Beach.

The “Best Blues Band in Connecticut” was also one of the most unique and entertaining bands at the 2015 IBCs. The Balkun Brothers will bring their unique sound and style to the stage prior to Eddie. Gaining followers with their gritty swagger, they are becoming known for their explosive live shows and are quickly evolving into one of New England’s premier blues-rock acts. Their first full length album, ReDrova, was released in January 2015, and they have been working on a follow-up with Popa Chubby. This band will bring you to your feet!

Saturday opens with 2015 IBC first place solo/duo artist Randy McQuay. At the IBCs, Randy used his voice, guitar, harmonica and stomp box to create a unique theater filling sound. Randy’s evocative takes on rhythm & blues, folk, rock & roll, funk and roots music are the perfect beginning to what will be a legendary Saturday at the sixth annual Daytona Blues Festival.