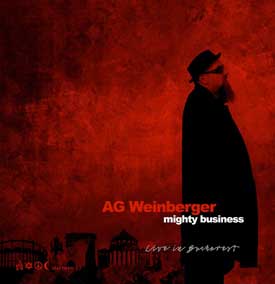 Delivered the way electric blues is meant to be…. Live, loud and raw, Mighty Business is the latest release from Romania’s premier blues artist AG Weinberger. The eleven-song disc, recorded in May 2009 at the Hard Rock Café in Bucharest, is the first live album from a man on a mission to bring blues to the world. The set kicks off with the Muddy Waters classic, “Baby Please Don’t Go,” that rips right from the get-go, followed by the first of four original blues songs, “Try To Get Into The Middle Of The Real.” AG and his 4-piece band make the most out of the slinky riff and nail duel leads throughout. Southern rocker, “I Can’t get Enough,” feels like a lost treasure from the Lynyrd Skynyrd songbook.

Guitar player, singer, harmonica player Attila Weinberger, popularly known as A.G., is peerless in his mastery of the American blues, a musical genre that has taken Romania, his native country, by storm. A self-taught guitarist from age 11, he garnered several prestigious Romanian awards by age 20. In the mid-80s, A.G. made the transition from rock guitarist to blues guitarist and has been on a roll ever since. In 1991 he puts together his own band to promote the Blues throughout the country, organizing concerts, setting up instructional workshops, and supporting the development of neophyte blues musicians.

Weinberger pursues his promotion of the Blues with missionary zeal. He advocates the Blues as a bold symbol of freedom and individualism and sees his music as an ideal vehicle for transferring these values to the Romanian youth. Through his art he aspires to create a bridge between American blues devotees and their Romanian counterparts whose numbers are increasing daily. He is a renowned singer/songwriter, record producer, radio/TV host and producer, educator and guitarist and founder of the BlueSylvania Foundation.

A central figure on the Romanian blues and jazz scene, AG is also a multi-award winner and the recipient of the Presidential Medal – the highest honor in Romania for Arts, Music and Cultural recognition.

Hailing from fabled region of Transylvania, AG stands 6’5” and tips the scales at 255 pounds. This unforgettable bluesman is a giant, in terms of his monumental efforts to popularize the blues in Eastern Europe and in terms of his stature and stage presence.