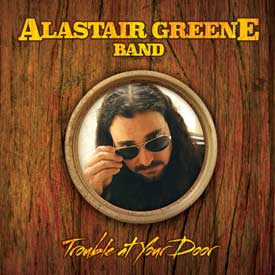 Blues and rock have met at many different crossroads, From Cream and Johnny Winter to Stevie Ray Vaughan and Gov’t Mule these blues rock recipes are often boiled down to a simple trio.  Such is the melting pot of influences and presentation of the Alastair Greene Band. Greene formed his first blues rock trio with former members of the legendary Southern California band The Pontiax in 1997. The Alastair Greene Band (AGB) has gone through several incarnations and line-ups over the years and has included alumni of the Steve Miller Band, Paul Butterfield Band, and Junior Wells Band.  The AGB has also backed many blues artists in the studio and on stage, including Delta Groove recording artists Mitch Kashmar, Frank Goldwasser, as well as the incomparable James Harman. Currently, the line-up has solidified with Alastair Greene on guitar and vocals, Jim Rankin on bass and vocals, and Austin Beede on drums.

Not only is Greene a blues rock guitar slinging and singing front man, but he has also served many years as a side man to some legendary musicians. Currently, Greene is the touring guitarist with Alan Parsons and has been touring internationally with the English pop/progressive rock veteran since 2010. After Greene played on Parsons’ 2004 release A Valid Path, Alan was quoted saying, “Alastair should be out playing guitar with the biggest bands in the world.  I believe it’s just a matter of time.” Heady praise indeed coming from the man who engineered Pink Floyd’s Dark Side of the

Moon, served as second engineer on the last two album by The Beatles, and has also sold millions of albums with his own Alan Parsons Project.  When the guitar slot for Parsons’ band opened in 2010, Greene got the call. Alastair has also appeared on albums by high profile artists such as drum legend Aynsely Dunbar as well as Toad the Wet Sprocket front man Glen Phillips.

Alastair Greene has released four studio albums and one live record since 2002. His fifth studio recording will be the Eclecto Groove Records offering Trouble at Your Door.  This is sure to be his most explosive recording thus far. The Alastair Greene Band combines a deep respect for traditional forms and themes, but adds a modern approach combined with a classic rock sounds.  Drummer Austin Beede brings a deep knowledge of jazz and rock grooves, as well as an innate ability to shuffle with the best of them, while Jim Rankin’s rock solid rhythm & blues and classic rock influences on both bass and vocals have been a welcomed addition to the band. “This is the happiest I’ve been musically in a long time,” Greene said recently. “These guys are so much fun to play music with.  We’ve got a great chemistry, and I can’t wait for the world to hear it.”