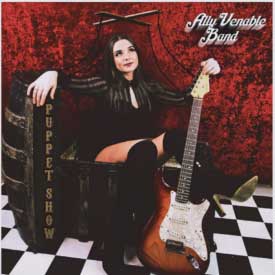 Puppet Show is all about songs that connect. It radiates a sense of soul through the songwriting and guitar playing, as well as the vocals that are laid out throughout the album. The disc opens up with a haunting riff for the song “Devil’s Son,” which features Gary Hoey on lead guitar along with Ally Venable on guitar and vocals. Together, they stir a powerful tune that will stay on repeat. The next track, “Bridges to Burn” strikes an unforgettable melody within the song, with guest artist Lance Lopez and Ally playing in harmony together to resonate a powerful statement with their guitar playing. “Sleeping Through the Storm” is another number that portrays the message of conquering one’s struggles and persevering through the storm that approaches us in our lives. With compelling lyrics and strong blues rock guitar playing, Puppet Show represents the future of the blues.

“I had a blast guesting on the song, ‘Devil’s Son,’” says acclaimed rock guitarist Gary Hoey. “Ally has a maturity as a song writer beyond her years and her guitar playing and singing are the real deal. ‘Devils Son’ is a bad-ass song with a haunting riff; I had a blast playing my Highway 61 Dobro guitar on it. Bravo Ally!”

Adds Lance Lopez, who’s been a mentor to the 19-year-old Venable, “Ally has been working very hard to become the young guitar slingin’ Senorita she is. It’s been such a pleasure to share my knowledge with her and watch her grow!”

A powerhouse singer and guitar player, Ally Venable has ignited excitement on the Texas blues scene. She began singing at an early age in church and then in recent years picked up the guitar and found her true passion. A protégé of Lance Lopez, with her songwriting and onstage performances, this teen musician packs a punch. Ally was the 2014 and 2015 East Texas Female Guitarist of the Year. The Ally Venable Band also won 2015, 2016, and 2017 honors as East Texas Blues Band of the year.