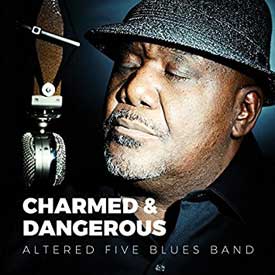 Blind Pig Records releases new Altered Five Blues Band album, Charmed & Dangerous. The Milwaukee-based quintet is the first artist to join the roster of the esteemed blues/roots label since it was acquired by The Orchard, one of the largest independent distributors in the world. The band’s label debut was produced by multi-Grammy-winner Tom Hambridge (Buddy Guy, Susan Tedeschi, James Cotton).

Charmed & Dangerous is the eagerly awaited follow-up to the group’s 2014 album Cryin’ Mercy, which reached #3 in the iTunes blues store, hit #1 on the Roots Music Report blues chart, and won “Best Self-Released CD” at the 2015 International Blues Challenge. The new album features 13 tracks, including one inspired by legendary Delta bluesman Robert Johnson entitled “Three Forks.” The song features music, adapted with the permission of Johnson’s publisher, from the seminal classic “Crossroads,” plus a guest harmonica performance by Steve Cohen. Videos will also be released for four songs: “On My List to Quit,” “Three Forks,” “Eighth Wonder,” and the title track.

Taylor commented, “We’re fans of so many artists and records in the Blind Pig catalog, from Magic Slim and Otis Clay to Tommy Castro, Elvin Bishop, and more. We couldn’t be more excited and honored. This is a major milestone for our band and music.”