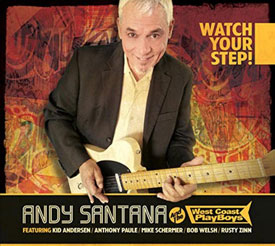 Veteran West Coast musician Andy Santana is a smooth, dynamic vocalist and harmonica player with a sophisticated urban style. With 35-years of professional experience, he is also an accomplished songwriter/guitarist with an unusual gift for lyrics and is proficient at creating powerful melodies. Watch Your Step! is a rompin’ and stompin’ good time featuring some of the best musicians on the West Coast including Kid Andersen, Anthony Paule, Mike Schermer, Bob Welsh, Kyle Jester and Rusty Zinn amongst others.

Andy’s eclectic roots styling has his own distinctive style and signature.Also for the first time with Rusty Zinn producing four songs, Andy showcases his unique guitar playing. Rusty says, “If Jimmy Spruill and Ike Turner had a baby it would be Andy.” Andy and his talented choice of musicians, represents a philosophy of American Roots music and on Watch Your Step! it all comes together in an unforgettable way.

Santana’s band has been chosen as the house band or session musicians for blues performances, including the Jazz and Heritage Festival in New Orleans with C.P. Love, and at the Bay Area Music Awards backing Bukka White, Joe Louis Walker, the Gospel Hummingbirds and Bonnie Raitt. For five years running they were chosen as the host band for the Hollywood Hall of Fame Festival, backing Willie Dixon, Jimmy Rogers, Luther Tucker, Billy Boy Arnold, Dave Myers, Carey Bell and William Clarke.

“Andy Santana plays the guitar exactly like I like. He has a clean precise tone that is very melodic. It is simple and to the point never losing sight of the melody just like his wonderful vocals.” – Anson Funderburgh

“Andy’s a great musician and singer. Plays a mean blues guitar. Love his material and the recording.” – Billy Flynn

“Andy Santana is a local legend in Northern California, having been soulfully singing, blowing harp, playing rocking blues guitar and leading first class blues combos for four decades. Now Andy is a Delta Groove artist and hopefully the world will know what a shining star we have in the NorCal region. Show us what you got dude!” – Mark Hummel