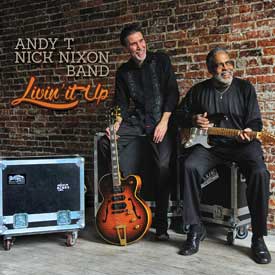 The blues has a history of great collaborations.  Now it’s time to add Andy T and James “Nick” Nixon to that venerable list thanks to the red clay covered roots of Nick’s dynamic voice and Andy’s bold, vibrant tones and equally rooted guitar style.  Nick in one of those amazing artists that rarely surface today.  This velvet voiced singer was born and raised in Nashville and was part of the thriving Jefferson Street blues scene of the ‘60s.  Nick was a Chess Records recording artist in the ‘70s and is a key figure in today’s reviving Nashville blues scene.  “Andy T” Talamantez was born and raised in Southern California, and relocated to Nashville in 2008.  His guitar style is influenced by T-Bone Walker, B.B. King, Magic Sam and Albert Collins among others, yet it remains his own.  After meeting James “Nick” Nixon, and watching him perform, Andy knew that they would make an unstoppable combination.  And they proved that with 2013’s Drink Drank Drunk.

The album, produced by Texas blues legend Anson Funderburgh, has been embraced by hundreds of radio stations, reaching number two on Sirius/XM radio’s million-subscriber “B.B. King’s Bluesville” and climbing the Living Blues chart.  Critics have praised their tasteful and authentic approach in the Nashville Tennessean, Elmore, Living Blues, Blues Bytes and a host of other mainstream and specialty publications.  And – most important –the fans have fallen in love with their dynamic, rooted live performances, making Andy, Nick and their backing quintet of veteran musicians an in-demand act at festivals and clubs across the world.  These include Arkansas’ historic King Biscuit Festival and the Moulin Blues Festival in Oslo, Norway, and such prestigious venues as Phoenix’s Rhythm Room, B.B. King’s on Memphis’ Beale Street, Biscuits & Blues in San Francisco and Knuckleheads in Kansas City, Missouri.

After storming the international blues scene in the year since their debut album on Delta Groove, the Andy T – Nick Nixon Band wasted no time in knockin’ out another spirited and rousing effort with their sophomore release Livin’ It Up, which once again falls under the guidance and direction of iconic Texas blues guitarist/producer Anson Funderburgh.  Blending together the regional influences of Memphis soul, Texas blues and New Orleans R&B, Andy, Nick and the band dish out ten new original compositions, along with three choice covers selected from the songbooks of T-Bone Walker, Alvin Robinson and Delbert McClinton.  Rounding out this offering are a pair of accomplished Dallas-based musicians making a return appearance from the previous album including Austrian born multi-instrumentalist Christian Dozzler on piano and accordion and saxophonist Ron Jones.