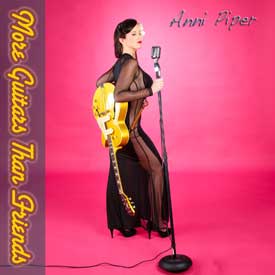 Award-winning bassist-vocalist Anni Piper’s new album, More Guitars Than Friends, is a ten-song disc with a lively potpourri of sounds, and the first to be released on Piper’s own Sugar Daddy Records imprint. “All the original songs on the album were written since I moved to the US about a year ago,” states the Australian expatriate now residing c. More Guitars Than Friends was recorded, mixed, and mastered at Solar Studio (using exclusively solar power) in Orlando, Florida.

The track “Wonder Woman” was a 2015 UK Songwriting Contest Top 5 Song Finalist. “It’s where the bass guitar gets a chance to shine in this jump-blues, break-up song,” explains Piper. “I play the role of the heroine as I lament, ‘I’m a wonder woman, I wonder what I saw in you.” “Just A Little Bit,” a high-energy blues standard with her own cheeky interpretation, was originally recorded by Rosco Gordon. “Buckle Bunny” is a catchy Texas-style blues about cowboy fantasies. The title track, “More Guitars Than Friends,” is “the most honest and sincere song I have ever written,” says Piper. “I’ve had some awful experiences with musicians on the road. There have been many nights when I sat in my hotel room, all alone except for my bass guitar,” she reveals.

“Paper Bag” is a funny, sassy, soul anthem featuring Charlie de Chant (Hall and Oates) on saxophone. Piper says it’s her favorite track on the album (see the music video, too). “Cold Pizza And Warm Beer” is a cover by Saffire! The Uppity Blues Women. Piper says she’s been performing this song for so many years and has often been asked, ‘what album is the cold pizza song on’? She thought it was about time to record it.

“Shotgun Wedding” is a tribute to her (adopted) home state of Florida, with an island feel and a tale of courtship in the Deep South from days gone by. The song features husband Jabba on shotgun and Piper’s band “hooting, hollering, and yeehaw-ing.”

“I’m Lost Without You” is a cover originally done by Memphis Slim with a transition from a Latin feel to the swing section. “Eugene” is about a cad in a cowboy hat and a nod to the great Chuck Berry. “Blackberry Brandy” was written in a hotel room in Tennessee. “You can’t fake that sort of melancholy,” says Piper.