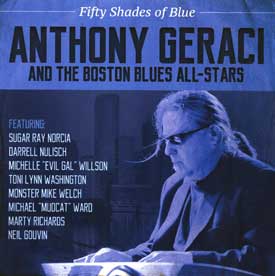 Anthony Geraci and the Boston Blues All-Stars Fifty Shades of Blue is their Delta Groove Music debut. The Boston Blues All-Stars are the same musicians Geraci has been playing with for parts of the last five decades. They include vocalists Toni Lynn Washington, Darrell Nulisch, Michelle “Evil Gal” Willson and of course Sugar Ray Norcia. As Geraci points out, “I don’t sing, so why not get the best.” The “best” are backed by guitarist “Monster” Mike Welch, bassist Michael “Mudcat” Ward and drummers Marty Richards and Neil Gouvin. The All-Stars take on thirteen Geraci-penned numbers that are full of fresh original ideas that are applied to music that come from many shades of the blues palette. The album earned an impressive four Blues Music Award nominations by The Blues Foundation, including Album of the Year, Traditional Blues Album, Song (“Fifty Shades of Blue”) and Pinetop Perkins Piano Player.

For almost 40-years pianist/composer Anthony Geraci has played behind some of the most influential blues musicians of the 20th century. He is an original member of both Sugar Ray & the Bluetones and Ronnie Earl & the Broadcasters, and has been recognized for his contributions on numerous albums by nominations from both the Blues Music Awards and the Grammys.

“Throughout these 13 tunes, Geraci proves himself a wonderful songwriter who touches on the many genres of American music. “Don’t Keep Me Waiting” and “Your Turn To Cry” are reminiscent of 40’s jazz standards, “Too Late For Coffee” honors the Western waltz traditions, and “In The Quicksand, Again” is an instrumental carved from Freddie King’s early 1960s work. Start to finish, a magnificent record.” – Art Tipaldi-Blues Music Magazine

“Geraci’s excuisite work has been spotlighted in the past with Sugar Ray and the Bluetones and with Ronnie Earl and the Broadcasters. As impressive as those gigs were, nothing prepared me for this album from Anthony Geraci and the Boston Blues All-Stars.”  Mark E. Gallo-Blues Bytes Magazine

“Anthony Geraci has long been known as one of the finest blues piano players on the planet.” Mick Rainsford-Blues In Britain

Music memories are made of this… RB Stone :: SOME CALL IT FREEDOM (some call it the blues)