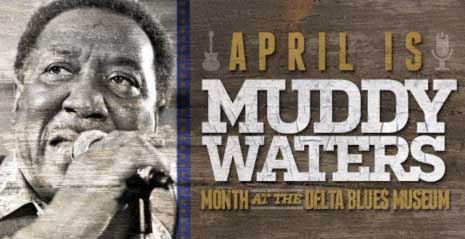 Clarksdale, MS  – The Delta Blues Museum kicks off “Muddy Waters Month” this week with a new exhibit and a special birthday celebration for the famed Delta musician who continues to influence generations of musicians worldwide: 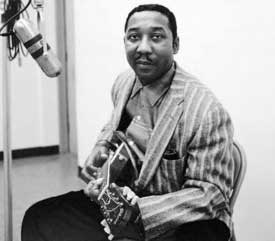 On Thursday, April 3rd, the Museum hosts author Terry Abrahamson for the opening of his photography exhibit, In the Belly of the Blues, on display at the Museum through July 31st. From his website,”[Abrahamson] won a Grammy writing songs for Muddy Waters, helped launch the career of George Thorogood, created the first radio commercial ever performed by John Lee Hooker…In the Belly of the Blues is (Abrahamson’s) book, part of the permanent collection of the Library of the Rock and Roll Hall of Fame.” Abrahamson acknowledges a special personal connection to the Delta and offers that ,”to be invited to share my memories of my heroes here in the shadow of the Crossroads, in celebration of the birthday of a man I am proud to call my collaborator and my friend, I couldn’t be more satisfied.” The reception is free and open to the public from 5 – 7PM, with music by Heavy Suga and The Sweet Tones. The exhibit, reception and related events are all sponsored by Wal-Mart, Barnes Pettey Financial Advisors, Shack Up Inn, Mississippi Arts Commission, National Endowment for the Arts and Friends of the Delta Blues Museum.

Friday, April 4th, is Muddy Waters’ birthday, and the public is invited to join Museum staff in this day-long celebration, with complimentary cupcakes for all who visit. Terry Abrahamson will offer a free multimedia presentation based on the “In the Belly of the Blues” exhibit, at the Museum at 4PM. On Saturday, April 5th, the Museum will offer a book signing for Abrahamson’s written work, In the Belly of the Blues: Chicago to Boston to L.A. 1969-1983. A Memoir, from 1:30 – 2:30PM.

During Juke Joint Festival, Delta Blues Museum will present “Call and Response – Conversations in the Blues” on Friday, April 11th. Blues artist and educator Big Jon Short will lead a discussion with native Mississippi blues artists who talk about their influences and experiences growing up around the Delta, living and playing the Blues. Through stories, songs and discussion, the artists will share with the audience some insight into where they first heard, how they learned and what it’s like to live the Delta Blues.

On Saturday, April 12th, the Museum hosts musician and scholar Stephen Wade in a conversation on “The Beautiful Music All Around Us,” based on his work of the same name. The presentation will include a discussion of the life and music Bozie Sturdivant and documented by John Work and Alan Lomax and is free and open to the public at the Museum, at 10:30AM. A book signing will follow the presentation, and the Delta Blues Museum Band will perform on the Museum Main Stage at 2PM.

McKinley Morganfield–better known as Muddy Waters–is one of the most powerful forces behind American music today. Muddy was born in the Delta near Rolling Fork, Mississippi, and later moved to Clarksdale, where he worked and lived on Stovall Plantation. The son of a talented bluesman, Muddy taught himself to play bottleneck slide guitar as a teen; a chance recording with Alan Lomax inspired Muddy to become a full-time musician.

Playing with Son Sims around the Mississippi Delta, in Memphis and in St. Louis, Muddy eventually found his musical home in Chicago, where he signed with Chess Records and changed the game by electrifying the blues. He scored 15 hits in the 1950s alone, effectively creating the sound known as “Chicago blues,” a sound that immediately resonated with aspiring young musicians like Paul Butterfield and Johnny Winter. Muddy took his amplified sound overseas to Europe, where his musical shockwaves started a revolution that continues today, through the artists he influenced-most notably Eric Clapton, Jimmy Page and The Rolling Stones, who took their name from a Muddy Waters song.

A 2013 recipient of the National Medal for Museum and Library Services–the nation’s highest honor for museum and library service to the community–the Delta Blues Museum is dedicated to creating a welcoming place where visitors find meaning, value and perspective by exploring the history and heritage of the unique American musical art form, the Blues.

The museum seeks $1.2 million for new and enhanced exhibits for Phase II of the Museum’s expansion–which includes the new Muddy Waters Addition–enabling the cultural organization to better preserve and display the history and work of Blues artists from the Mississippi Delta, and advancing the Museum’s ability to “tell” stories that inspire and educate future generations about this important American art form.

For online donations or for more information on events or programs, please call (662) 627-6820, or visit the Museum web site at www.deltabluesmuseum.org .