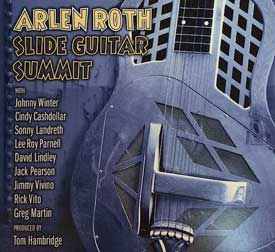 “This Slide Guitar Summit album was a longtime dream come true for me,” recalls Arlen Roth about the recording sessions. “It’s like a group of old friends getting together for a great time that is rooted in our serious and mutual love for what we do.”

Recording with the late Johnny Winter was also special for Roth, since it turned out be Winter’s last session before he passed away in 2014.

The CD pays tribute to many of the great slide players such as Lowell George, Elmore James and Duane Allman. “I suppose the thing about this album that intrigues me the most,” says Roth, “is how with the common thread of slide guitar we were all able to touch upon so many styles, emotions, traditions and also break new ground at the same time!”

Guitar legend Arlen Roth is considered one of the most influential guitarists of all time, and during the course of his 45-year-career has toured the world and recorded with an amazing list of artists, including Simon and Garfunkel, Bob Dylan, John Prine, Phoebe Snow, Levon Helm, Ry Cooder, Eric Andersen, Dusty Springfield, Janis Ian and The Bee Gees, among others. His teaching and creation of the Hot Licks Video pioneered music and guitar education all over the world, with his videos having sold in excess of 2.5 million copies. His current online lessons and blogs for Gibson.com have over 1 million followers. Arlen was also the man behind the legendary blues film, Crossroads, creating the guitar parts, directing the guitar scenes and working alongside fellow guitarist Ry Cooder and actor Ralph Macchio during the film’s production. He was voted in the “Top 50 Acoustic Guitarists of All-Time” by Gibson.com and in the “Top 100 Most Influential Guitarists of All-Time” by Vintage Guitar Magazine. He has eight best-selling books to his credit, and his book, Hot Guitar, is a compilation of 10 years of his wildly popular column for Guitar Player Magazine.

Arlen Roth continues to record and tour all over the world. His current band, The Cordobas, features Eddie Denise on bass, Shannon Ford on drums and Chris Foley on second guitar. His daughter, Lexie Roth, also sings with the band, and has become a superb recording artist, vocalist and songwriter in her own right, with many credits to her name.

With songs that cover multiple genres of music, Slide Guitar Summit promises to reach a wide ranging audience of fans and promises to be one of the most celebrated albums of the year.

Arlen Roth is also the founder and CEO of the “International Guitar Hall of Fame and Museum,” which has been a long-time dream for him to create.