At the Daytona Blues Festival, October 7-9, there is too much music for just one stage 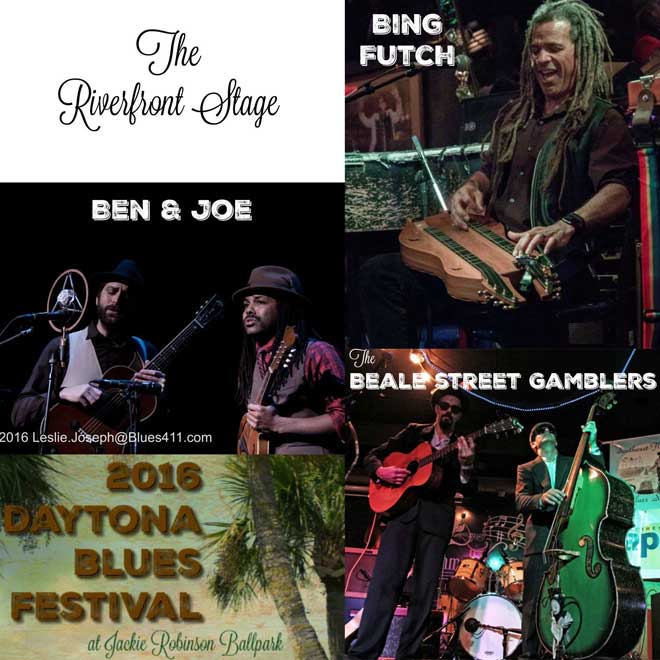 (Daytona Beach, FL) – While the 7th annual Daytona Blues Festival officially kicks off at Jackie Robinson Ballpark, downtown Daytona Beach, Florida at 2:30 pm Friday, October 7th, the music actually begins at the welcome party, Thursday October 6th, at Bahama Breeze Island Grille. Starting at 8:00 pm, Josh “The Pitbull of Blues” Rowland and his band will get the party started with two free sets for festival attendees. With his band and as a solo act, Josh has been a crowd and judges’ favorite at the IBCs for the past two years. Josh’s fun-loving mix of traditional and original blues is the perfect start to a great weekend of music.

The legendary Friday, October 7th, “Women in Blues” line up has already been highlighted. But those stellar women are not the only music makers Friday. The Riverfront Stage, in its second year, will feature 2016 IBC solo finalist and “Best Guitarist” winner Bing Futch, and 2016 IBC solo/duo winners Ben Hunter and Joe Seamons, keeping the blues flowing between sets.

In fact, Florida native Bing Futch will grace the Riverfront Stage each day of the festival. Using his Appalachian mountain dulcimer, Native American Flute, ukulele, and some surprises, expect Bing to deftly navigate the varied waters of traditional and modern Americana with passion, wit, and a genuinely huge heart for sharing music with the crowd. Bing has a casual yet intimate way of connecting with his audience. His energy, huge smile and bouncing dreadlocks have a way of captivating any crowd. Bing may be one of the most genuine performers you will ever see, and his presence on the Riverfront Stage between acts means festival goers must get up and move to not miss a note.

When Ben Hunter and Joe Seamons play, they transport the listener to the turn of the century. Labor camps, scorned and abused women, the many hardships of African Americans, and the joy of music transcending struggle and strife, Ben and Joe bring it all. What can you say about the perfect combination of master historians and amazing multi-instrumentalist musicians? One thing is certain – don’t miss their two sets on the Riverfront Stage, be there for their main stage set Sunday afternoon, and you will still be wanting more from these indescribably talented blues and roots musicians.

The third Riverfront Stage act is one few blues fans have seen. That is because it is a brand new act out of Fort Meyers, Florida with the auspicious moniker “The Beale Street Gamblers.” But many blues fans have seen at least a part of this act. Ryan “Little Eddie” Bladen was a solo performer at the 2015 IBCs, and a Riverfront Stage performer at the 2015 Daytona Blues Festival. When Ryan won the right to represent Southwest Florida at the IBCs again in 2016 as a duo, he had to be asked back.

But what about the famous after parties? Glad you asked! Josh “Pitbull” Rowland follows the performance at the welcome party as the Friday night host to the Daytona Blues Festival after party at Bahama Breeze Island Grille. The roof will be raised. Saturday and Sunday will benefit from one of the great blues jam hosts of all time, Tas Cru, as he and his Tortured Souls take over hosting duty. Knowing blues fans will look at the line ups and see the amazing after jam potential no one wants to miss.

So book your hotel rooms and get your tickets, and don’t miss the best blues at the nicest time of the year.