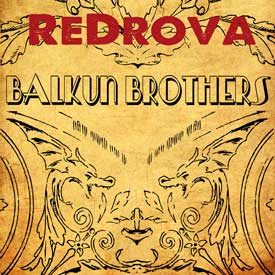 ReDrova is Balkun Brothers’ first full-length, self-produced album that includes an impressive variety of musical styles that sends the listener on a journey from the roots of American blues to the future of rock n’ roll and beyond. Drawing inspiration from the traditional sounds of delta and electric blues, then fusing it with heavy guitar riffs and funky in-the-pocket rhythms, the album aims to push the known boundaries of the blues. This set of songs speaks volumes about the band’s growth sonically, lyrically and musically, showcasing a vast amount of new age, energetic melodies that are strategically intertwined within varying dynamic ranges throughout the entire album to capture the listener at every twist and turn.

Balkun Brothers is an award-winning band from Hartford, Connecticut originally formed in 2010 by brothers Steve and Nick Balkun, along with bassist, Caleb Battersby. In addition to recording and releasing ReDrova they have shared the stage with acts such as the late Johnny Winter, Joe Bonamassa, James Cotton, Popa Chubby, Eric Sardinas, Albert Castiglia, Dopapod, Melvin Seals and JGB, The Mike Dillon Band and many more.

ReDrova was mixed and mastered at More Sound Studios in Syracuse, NY by accomplished engineer/producer Jason “Jocko” Randall. Jocko has worked as a live sound engineer and studio producer for hundreds of musicians all over the world.

“The Balkun Brothers are a unique bit of the truth in a world full of musical lies and chicanery. These kids are torchbearers paying tribute to the blues with fat riffs and hard beats that would have Muddy dancin’. Great CD!” … Popa Chubby