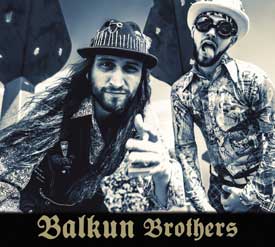 Balkun Brothers’ self-titled album is a powerful blend of infectious grooves, hard‐hitting guitars, monstrous drums, and deep, raw blues soul. The band’s second full length album (first as a duo) is a testament to the brothers’ dedicated search for new and exciting sounds that push the boundaries of blues, funk, and rock n’roll.

Balkun Brothers have teamed up with New York City blues giant, Popa Chubby, who helped assist the Band in the production of the album, as well as engineering and recording the 12-song outing at Serpentine Studios in Central Valley, New York.

With sonic influences from the earliest era of the Delta masters to the most modern rock n’ roll titans, the two brothers have conjured up a mighty musical mash that will have your head-bangin’, hips shakin,’ and boots stompin.’ The album showcases the fiery slide guitar of older brother Steve and the funky, heavy-rockin’ rhythms of younger brother Nick on the drum kit.