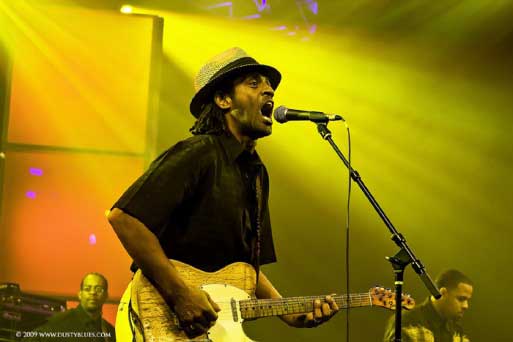 A patriarch of Baton Rouge’s first family of music says his “heart is broken on both sides” after that city’s recent tragedies.

“We’ve got to come together and make things right,” said Kenny Neal, who was close with people involved. Three police officers were killed Sunday [July 17] and another three wounded in what has been described as an “ambush-style” attack, which occurred less than two weeks after a Baton Rouge man was shot to death by police.

“I was here a week before last and the tensions were high,” Neal said. “People were very upset. We’ve got to get together and make this right and make this better for everybody. I am friends with a lot of these officers. I am friends with the Chief of Police, we went to first grade together. The mayor … he’s a very close friend to the family. “And on the other side of it, (Alton Sterling, the man killed by police on July 5) was my nephew’s first cousin. I’ve known that family all my life, and I knew him as well. For me, it’s just hurt. My heart is broken on both sides.”

Neal said events with music and food, such as his Kenny Neal Family and Friends Heritage Festival, help bond people from different parts of the community.

“At my festival, we’ve got everybody there just having a great day and I think that’s the way our community should pull together as well and I’m sure we will,” he said.

Perhaps inspired by Neal’s festival, South Lake Tahoe’s Brad Andres is putting on his own public event for the first time. The Genoa Blues Festival on Saturday, July 30, features Kenny Neal and the Family Band, Grady Champion and the Buddy Emmer Blues Band. Neal shared a secret Cajun food recipe along with some advice.

“I’ve known Brad for a few years,” Neal said. “He’s a great guy. That’s my brother from another mother. I told him to go ahead with the festival and go full force with it because I thought it was a great idea. He’s got a passion for the music and I want to be there all the way to help make this thing take off. I tried (organizing) myself about five years ago and the first couple of years were a little rough and now it’s smoothing out. Now I am getting support from the city of Baton Rouge and hopefully he’ll get some support there. Every year it would get a little easier. And that’s what I told Brad. You’ve got to go for it.”

Andres hopes to make it an annual event, and Neal said he will continue to help.

“I know we have some great blues lovers in that area and I know a lot of the blues guys on the circuit,” Neal said. “We’ll try it this year and next year will try to bring some of the heavyweight blues bands out there.”

Gates for the Genoa Blues Festival open at Saturday, July 30, at 2 p.m. and the music will last until about 7. General Admission tickets are $32.50. VIP tickets, which include food and special seats, are $48.50. All tickets are available at Eventbrite.com. To purchase tickets, click here. VIP tickets get special seating and other benefits, while General Admission can spread out on blankets and folding chairs on Mormon Station’s 3½-acre Historic Station State Park, 2295 Main St, Genoa, Nevada 89411.

“I want all the (Tahoe Onstage) readers to come on out and have a good time because that’s what we’re going to bring to the stage,” Neal said. “Laissez les bon temps rouler — Let the good times roll. That’s the way we do it out here.”