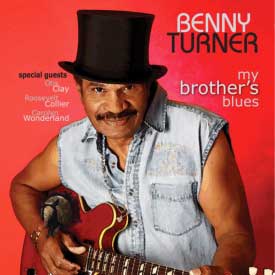 Hard on the heels of his vaunted 2016 album When She’s Gone and his 2017 autobiography, Survivor, living blues legend Benny Turner adds to his family’s legacy with a fifth album that pays homage to his big brother and best friend, Freddie King. My Brother’s Blues is more than your typical tribute album, as it comes from the man who stood by King’s side for decades and helped create his catalog of timeless blues and R&B classics as a band mate, brother, and comrade in arms who paid their dues together, circling the globe spreading the gospel of the Freddie King Band.

The set opens the four-on-the-floor funk “Big Legged Woman” just as it did back in the day when the band was on the road. This time around a hot horn section emphasizes the signature riff alongside sweet Hammond B3. One of Turner’s all-time favorites “It’s Your Move” follows with a slinky syncopated shuffle and more horn jabs. Turner then transforms the slow blues standard “Have You Ever Loved A Women” into a passionate sermonette on the trials and tribulations of love, while Jack Miele adds testimony on lead guitar and a gospel chorus lends support.

Turner trades barbs with Otis Clay and Marva Wright, before their untimely passing, on a souped-up version of King’s much-loved Texas Blues “I’m Tore Down;” this one-time blues summit now available for the world to share in its joyful brilliance. Piano man Joe Krown leads the crew as Turner milks the bump and grind blues “You’ve Got To Love Her With A Feeling” for all its worth, that also features tasty leads from guitarist June Yamagishi from the Wild Magnolias. Roosevelt Collier drops in some greasy Sacred Steel on a forward-moving take on “I’m Ready.” Turner then returns to the 1961 debut album, “Freddie King Sings,” and delivers a straight up cover of the boogie woogie “See See Baby,” featuring the bold saxophone of Jason Mingledorff, staying true to the original recording.

Fellow Texan Carolyn Wonderland makes a guest appearance on slide guitar during the double shuffle ‘Mojo Boogie’ and adds her vocal skills to the smooth soulful sing-along “Wee Baby Blues.” The poetic social commentary of “Ghetto Woman” was a hit for both B.B. and Freddie King in the early 70’s and Turner’s emphatic reading conveys the power of the lyrics that feel so pertinent once again in today’s heated racial climate. The set ends with Turner pouring his heart into the slow blues anthem “Same Old Blues,” a final emotion-filled eulogy for his dearly departed soul mate, who literally saved his life on many occasion and deserves his place among the Kings of the Blues.