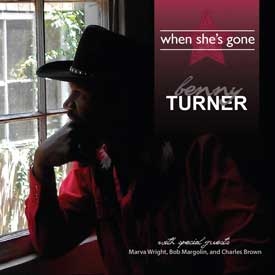 Nominated for 2016 Blues Blast Soul Blues Album of the Year and Winner of the Independent Music Awards blues song of the year (“I Can’t Leave”), this is sure to be a winning addition to your music collection.

when she’s gone is in loving memory of Ella Mae, the mother who raised two blues legends – Benny and his big brother, the late blues legend Freddie King, a 2012 inductee into the Rock and Roll Hall of Fame. Turner, who toured with King until his death in 1976, says he remembers their mother, Ella Mae King Turner, playing guitar. “Played good guitar, rhythm, rhythm guitar, no picking, just rhythm,” Turner says, adding that music was second nature growing up in Gilmer.

From Texas to Chicago to New Orleans and worldwide, he’s played alongside the giants and has taken his rightful place on center stage at last.