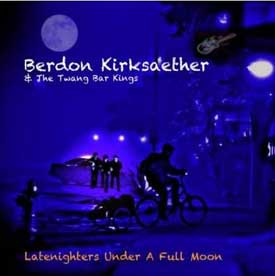 Berdon Kirksaether is a veteran Norwegian composer, guitarist, singer and music producer. He is a veteran on the in the Norwegian blues scene, most notably through his work in CIA, arguably one of the finest blues bands in the country in their prime. They toured Norway extensively during the nineties and released two critically acclaimed records.

Latenighters Under A Full Moon from Berdon Kirksaether & The Twang Bar Kings brings together three of the members of CIA. Stein Tumert and Per Eriksen who join forces with Berdon to bring back the energy and groove that made CIA one of the most popular blues and soul acts in Norway. In addition, Olaf Olsen, Finn Tore Tokle and Leo Volskiy, all well-known musicians from Norway and Germany, are adding their mark on the new album.

This CD was partly recorded in Norway, partly in Germany. All of the band members have strong reputations for playing early 50s blues, including the gear they use, and play very authentic covers and originals steeped in that same genre. Latenighters Under A Full Moon is quite different from that.

“It is a concept album, taking a stroll through the night, drinking, partying, finally staggering home. Read the track listing again and you get the picture. It’s also an instrumental album, so the story is told through sound, through the music. …Over all, this is an imaginative album, with some very fine musicianship and arrangements. I listened first, without reading the promo, and didn’t get the journey-through -the-night theme. On second listening, following the track names, it made more sense. What I did get, first time through, was a jazzy sensibility overlaid by a band that really does know its blues. Will you like it? Instrumental blues is not for everybody. Blues is a vocal music first, unlike jazz. it is the jazzy qualities that give Kirksaether’s compositions their character. Several of the cuts on this album would make very fine movie soundtracks, the sort where you have to hang in your set until the end credits to find out who was playing it.” – Mike Garner www.blues.co.nz

Terry Hanck :: GOTTA BRING IT ON HOME TO YOU Southern Adventures of Cheryl & Tom: First Week