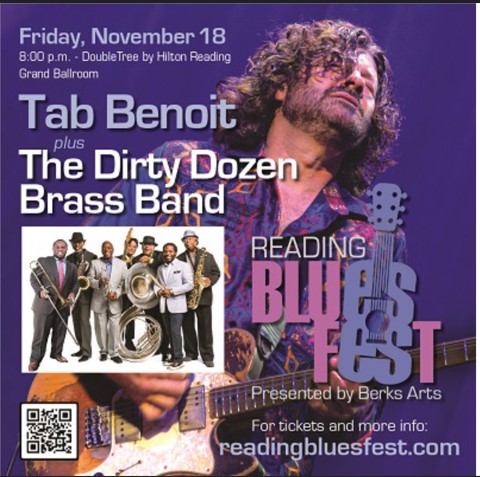 (READING, PA) – Reading Blues Fest, the annual celebration of traditional blues and its contemporary subgenres, will take place at the DoubleTree Hotel by Hilton Reading [Pennsylvania] from Friday, Nov 18 through Sunday, Nov 20. Arts Advocate ticket sales and general public sales have started, for both package and single performances.

This year, Reading Blues Fest has added a special Community Kickoff Concert on Thursday, Nov. 17, at the Reading Liederkranz, starting at 6 p.m. at the club on Mount Penn overlooking Reading. Performing will be Clarence Spady & The Electric City Band featuring The Berks Horns, and Busker Incognito Trio hosting Crossroads Blues Jam before Spady takes the stage.

Presented by Berks Arts, which also presents the renowned Boscov’s Berks Jazz Fest each spring, Reading Blues Fest provides a chance for fans to relax in the friendly atmosphere of the award-winning DoubleTree while enjoying concerts, blues-themed lunches and brunches and a Conversation with the Artists, hosted by Michael Cloeren, the founder and producer of the Pocono/ Pennsylvania Blues Festivals.

“The Reading Blues Fest certainly experienced some challenges with the COVID pandemic arriving just as the festival was gaining momentum,” Justin Heimbecker, Berks Arts executive director, said. “However, now that we are getting back to a typical festival cycle, fans have made it clear that they are eager to return to live events. We can’t wait to bring thousands of visitors to downtown Reading for the benefit and enjoyment of the entire community.”

Starting the music on Friday at 11:30 a.m. will be The Bluesmasters, featuring bassist Bennie Sims, keyboardist Cliff Starkey and saxophonist/vocalist Erich Cawalla (also known as The Groovemasters). This now-traditional blues lunch will be held at the iconic Peanut Bar Restaurant in downtown Reading. The Peanut Bar will also host The Dave Mell Blues Band for a blues dinner Saturday night.

Events at the DoubleTree will begin with BC (vocalist Bev Conklin) and guitarist Joe Mac, both part of BC Blue, entertaining a Welcome Party in Cheers American Bistro at 5 p.m. That night Baton Rouge, La. native Tab Benoit will bring his songwriting magic to a double bill that also includes The Dirty Dozen Brass Band, straight from New Orleans, at the Grand Ballroom.

Later that night at Cheers, BC Blue, a four-piece band of veteran blues instrumentalists, will feature Conklin, “Lehigh Valley’s Queen of the Blues” (originally from New Orleans), for a blues after-party.

Saturday morning, vocalist Vaneese Thomas, from Memphis’ First Family of Soul, will start the day with her “In Word and Song” in the Amphitheater; stick around for lunch at 11:30 a.m. and dinner at 4:30 p.m. in Cheers, while being serenaded by pianist Dave Keyes, this year’s BMA nominee for Best Instrumentalist-Piano.

That night, also in the Grand Ballroom, Canadian singer/songwriter Dawn Tyler Watson, the 2017 IBC Champion, will perform on the same bill with guitarist/singer/songwriter Eric Gales, who received BMAs for Blues Rock Artist of the Year in 2019 and 2020 with his brilliant upside-down and left-handed electric guitar playing and formidable vocals.

Later that night, Vermont-based blue-eyed-soul phenomenon Dave Keller and his trio will wind up an intense day in another after-party at Cheers.

The festival’s grand finale will be a Sunday Blues Brunch at 10:30 a.m., followed at noon by The Blood Brothers, who are bringing a reprise of their spring touring concert to Reading. Mike Zito and Albert Castiglia will perform separately with their bands, featuring music from their newly released albums, and then come together in a blues extravaganza.

Ticketing levels for the Reading Blues Fest range from an all-inclusive VIP package that includes a two-night stay at the DoubleTree, to tickets for individual concerts. For tickets and more information, visit the website. http://www.readingbluesfest.com/