Bernard Allison :: IN THE MIX 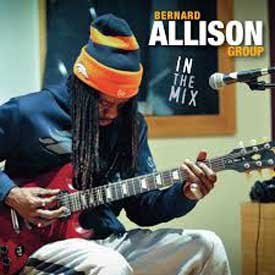 Blues guitarist and singer Bernard Allison produced and arranged In the Mix, his first new studio album in six years, featuring 10 tracks, including five originals, as well as covers of two songs from his legendary father, Luther Allison (“Move from the Hood” and “Moving On Up”), plus tunes from Colin James (“Five Long Years”), Freddie King (“I’d Rather Be Blind”) and Tyrone Davis (“I Had It All the Time”). In The Mix is on the Germany-based label, Jazzhaus Records.

Although firmly rooted in the blues, the music on In the Mix shows Bernard’s myriad of influences, including soul, rock and R&B. Allison says about the recording sessions: “I was very excited to record with my reformed group. We went into this recording with the mindset to not make a recording flooded with screaming guitars. I just wanted to share my arrangement and songwriting skills, as well as play some tracks I‘ve been holding onto for years. With the help of my bandmates as well as my mom Fannie Mae Allison, I can say I‘m very proud of the outcome of In the Mix, which reminds me a bit of the old Memphis soul sound with a touch of Hendrix’s Band of Gypsy’s group.”

Born in Chicago as the youngest of nine children of iconic bluesman Luther Allison (who bought his son his first guitar), Bernard got the playing bug at an early age when his father began schooling the youngster in the roots of black music and the art of the electric guitar.

Bernard made his first appearance on record at 13 and by age 18 had joined his father onstage for shows such as the Chicago Blues Festival. One week after graduating high school, he got the call from the great Koko Taylor, who asked Bernard to be the lead guitar player in her band. He played with Koko Taylor’s Blues Machine for three years, getting a wonderful education in how to behave both on and off the stage, and also backing the great Willie Dixon.

The 1980s brought contemporary influences and friendships with Johnny Winter and Stevie Ray Vaughan, and in 1990, Bernard Allison recorded his first solo album. Over the next 20 years, he recorded numerous studio and live albums, touring endlessly with his own band. When Luther Allison passed in 1997, son Bernard picked up the blues torch, but carried it with his own light, assuming the challenge of helping to keep the blues alive with his own brand of music that fused blues with rock, soul and other influences to carry it into the next millennium.

“The blues is my roots,” states Allison. “Regardless of how far outside of the blues I reach for tones, I can’t ever leave the blues. Whenever I play, all those guitar parts are Luther Allison coming through me. My dad was the same way; he wasn’t all blues. He loved Otis Redding and Chuck Berry. I’m just showing where my influences come from, and respecting the people who got me to this point.”