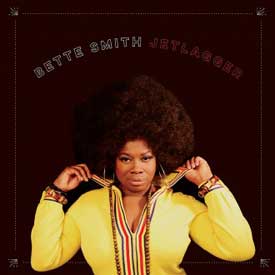 Brooklyn soul dynamo Bette Smith will release her debut album, Jetlagger, September 29 via Fat Possum subsidiary Big Legal Mess. Recorded in Mississippi with producer Jimbo Mathus—who’s played on
records by everyone from Valerie June to Elvis Costello—the album finds Smith reconnecting with the Deep South roots of the gospel, soul, and blues music she grew up singing in New York’s rough and
tumble Bedford-Stuyvesant neighborhood. The record also fulfills a deathbed promise Smith made to her late brother, Junior, that she’d keep on singing no matter what.

“He told me, ‘I want you to sing; don’t give up,’” remembers Smith, who wears yellow onstage to honor his memory. “It’s all for Junior, now.”

In a premiere and feature, Billboard’s Elias Leight writes, “A rugged, chugging southern soul record… Like Betty Davis or Betty Wright before her, she’s imbues tracks with shingly, sawtoothed texture, capable of breaking off a high note with a throaty cry or scraping so low and wide that she threatens to put her bass player out of work.”

Jetlagger’s ten tracks bring together obscure deep cuts, vintage classics, and originals written specifically for Smith, who counted late icon Ray Charles among the fans of her raspy and riveting voice. From a simmering take on Isaac Hayes’ “Do Your Thing” to a feverish rendition of the Staple Singers’ “City In The Sky,” the album showcases Smith’s fiery, mesmerizing delivery, rich with emotion and bruising in its honesty. Mathus dug deep into the Mississippi and Memphis soul bags for material, unearthing hidden gems like the moving “Flying Sweet Angel of Joy” by Famous L. Renfroe, while originals like the raucous soul-rocker “Man Child,” spare and funky “Shackles & Chains,” and Blaxsploitation soundtrack-esque “Durty Hustlin’” draw on Smith’s defiant and wild personality, as well as the hard-won perspective she gained growing up poor in Bed-Stuy. The deeply soulful title cut “I Will Feed You” and the rollicking title track were chosen from over a hundred songs that Smith wrote. First-call Memphis horn players Marc Franklin (Robert Cray, Lucero and Kirk Smothers (Don Bryant, Melissa Etheridge, Cyndi Lauper, Buddy Guy) were summoned to complete the album’s sound.

“Everything was recorded live,” recalls Smith, who cites her church choir director father and gospel-loving grandmother among her earliest influences. “I do well when I’m performing like that. There’s New York
aggressiveness and passion. I get to a fever pitch. I’m gone. I’m not even there anymore. Something else takes over.”

Jetlagger follows Smith’s 2016 EP, which earned her international tour dates and rave reviews. Bitch Magazine compared her to Lauryn Hill and Erykah Badu, praising her “stunning voice,” while Soul Tracks
hailed her music as “steaming,” and No Depression exalted her as “a woman with the blues power of both Big Mama Thornton and Bessie Smith, the smooth classiness of jazz/blues singer Joe Williams, the dynamics of Koko Taylor, and the energy of Janis Joplin all wrapped up tight in a relevant Billie Holiday look.”