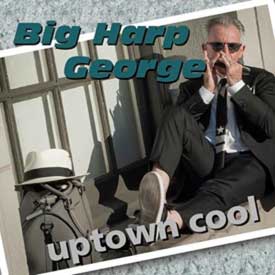 Big Harp George, the only blues artist featuring the chromatic harmonica, burst onto the international blues scene in 2014 with the stunning “Chromaticism” that was nominated both for Blues Music and Blues Blast Magazine awards for “Best New Artist Album.” As one critic commented: “I haven’t been this impressed by a harmonica player’s national debut since William Clarke’s 1990 tour de force “Blowin’ Like Hell.”

Now comes Uptown Cool, a masterpiece of twelve new original songs ranging in topic from online dating to the human costs of disruptive technologies. No one is spared George’s irreverent wit — neither the powerful, nor aging blues fans, nor himself — but it’s all in a spirit of unity and rollicking good fun.

As always, George surrounds himself with top talent, who thrive in the space he ensures them as bandleader. No indulgent solos here, just smart, tasteful playing. The influences are diverse: a strong Memphis/New Orleans brew infuses some songs, but Brazilian jazz and smoldering Chicago blues surface as well.

Big Harp George is redefining the role of chromatic harmonica in blues. But he is also commenting perceptively on life in the twenty-first century, helping to restore blues to rightful prominence in American popular music.