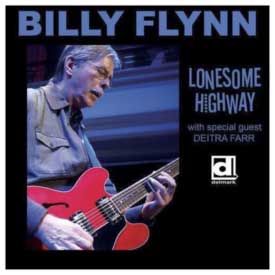 From sharing the Apollo Theater stage with Keith Richards, Eric Clapton, Billy Gibbons and others to backing Beyoncé Knowles at Barack Obama’s Neighborhood Inaugural Ball and on her Grammy winning single from the movie Cadillac Records; from his prolific sideman work to his ten albums as a leader, Billy Flynn is a true-blue heir of Delmark’s storied legacy. Lonesome Highway features 16 new original songs and special guest vocalist Deitra Farr! Producer Dick Shurman says of the set, “It’s one of the great Chicago blues guitar albums.” Kim Wilson, who regularly calls Billy for sessions, observes that, “Billy Flynn is one of the greatest blues guitarists alive and one of the greatest to ever live. He is truly the musician’s musician.”