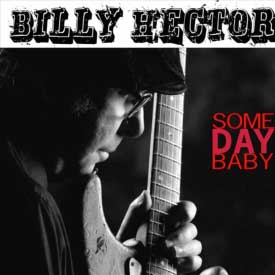 Billy Hector’s newest album is Some Day Baby. Whether Hector is teasing you with his sultry slide work, picking through Delta blues or flat-out cranking it up and crunching out electric blues-rock on his beloved vintage Fender Stratocaster, his music reflects the true soul and origins of the blues, always passionate, engaging and dedicated to making the audience move and sweat. Having honed his chops and style through three decades of performances, Hector is critically recognized as one of the hottest and most interesting guitarists/songwriters on the original circuit and has even been called “a New Jersey state treasure” by music writers.

Billy Hector has served as touring guitarist for Hubert Sumlin and Joe Louis Walker. He has been named “Best Guitarist,” “Best Blues Band” and “Living Legend” at the Asbury Park Music Awards, is a two-time winner of the East Coast Rocker’s “Best Guitarist” award and has received the Jersey Shore Jazz & Blues Foundation’s “Lifetime Achievement” award.