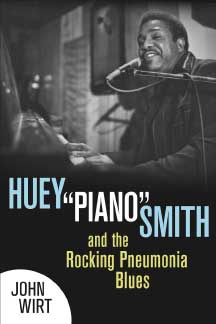 “I credit Huey with opening the door for funk, basically as we know it, in some ridiculously hip way, and putting it in the mainstream of the world’s music.” – Dr. John, Grammy winner & 2011 Rock and Roll Hall of Fame inductee

Baton Rouge, LA — Among those who love the music of New Orleans, Huey “Piano” Smith is a lost legend from the city’s golden age of rock and roll and rhythm-and-blues. A pianist, composer, producer and sometimes principal vocalist, Smith created songs that live among New Orleans and American music classics. The best known of them include 1957’s contagious “Rocking Pneumonia and the Boogie Woogie Flu”; 1958’s comic call-and-response “Don’t You Just Know It” as well as its pre-funk flipside, “High Blood Pressure”; and 1959’s equally infectious “Sea Cruise.”

An enigmatic personality and non-grandstanding artist in a business filled with extroverted performers, Smith made influential contributions to New Orleans music and the national and international music scenes as a songwriter, pianist and producer. His various singers — including Bobby Marchan, “Scarface” John Williams, Curley “Soul Train” Moore and white soul-singer Skip Easterling — and his singing groups the Clowns, the Pitter Pats, the Hueys and the Soul Shakers — were vehicles for his songs and productions.

“Huey ‘Piano’ Smith And The Rocking Pneumonia Blues” follows Smith from his Depression-era childhood to his years as pianist for 1950s blues star Guitar Slim to his mainstream success as a recording artist in the ’50s and ’60s. Drawing from first-person interviews with Smith and his peers, court records and meticulous research, veteran entertainment writer John Wirt also covers Smith’s professional disappointments and financial struggles. The composer-pianist spent much of the 1980s and ’90s in courtroom battles for royalties generated by his four most valuable songs.

Wirt’s intimate portrait of Smith depicts the artist’s endurance amidst financial disappointments and courtroom defeats. The author also underscores the lasting appeal of Smith’s songs and his enduring influence.