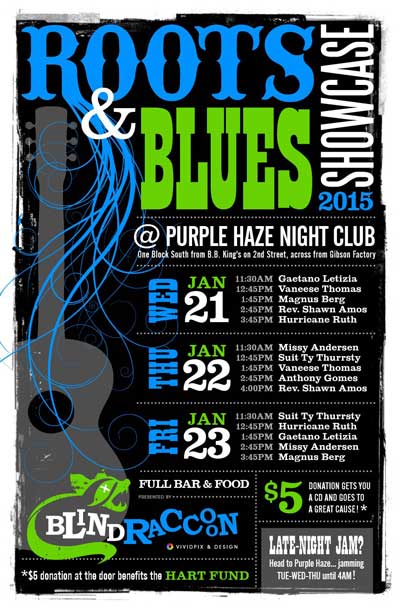 MEMPHIS, TN – Blind Raccoon is delighted to announce the line-up for their showcases happening during the International Blues Challenge in Memphis, TN. On January 21, 22 and 23, from 11:30am to 5pm, artists from Norway, Canada, California, Ohio, Illinois, Connecticut, and New York, a smorgasbord of roots and blues talent, will grace the stage. We have two 2015 Blues Music Award nominees – Vaneese Thomas & Missy Andersen, one 2015 IBC participant – Gaetano Letizia and the Underworld Blues Band – as well as several former IBC contestants performing over the three days. Net proceeds from the showcases will benefit The Blues Foundation’s HART Fund, which provides assistance to blues musicians and their families in times of great financial need due to medical emergencies.

Emcees are Peter “Blewzzman” Lauro of Mary4Music.com on Wednesday, Brett Fleming, host of Soul Stew, WEVL/Memphis, on Thursday, and Richard L’Hommedieu, producer of Live At The Midnight Circus and publisher of Making A Scene, on Friday. Blind Raccoon is a music marketing firm out of Memphis dedicated to spreading their artists’ music around the globe.