Blue Lunch :: ABOVE THE FOLD 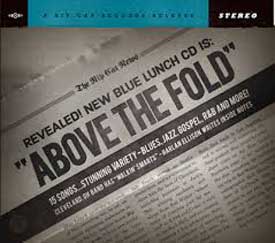 Blue Lunch, Cleveland-based band has followed up their Rip Cat debut album, Blue Lunch Special, with a sparkling new release titled Above the Fold. These eight musicians, making up the current and arguably best edition of the little big band that has delighted club-goers in the Midwest for over three decades, speak several blues dialects like gutbucket Chicago, T-Bone Walkers and West Coast jump-blues-with fluency and conviction.

But that’s just part of their modus operandi. These Ohioans play off and venture beyond blues conventions into top-grade Blue Note/Prestige-inspired jazz and classic New Orleans R&B and soul and even gospel. Mining the lodes of these traditions, Blue Lunch conjures a startlingly good hybrid sound of their very own.

Guitarist Bob Frank, who’s been a member since the mid-90s, and harmonica player Pete London, a founder of the band back in 1984, share the lead singing duties. They operate at impressive levels of self-confidence, staying away from the slick mannerisms that spoil the efforts of so many singers fronting horn bands these days. Frank shines as a guitarist, too… for starters, hear the powerful little story he tells in his solo in “Woman I Bleed,” and London is just as fine on blues harmonica. Frank’s also a perfectly good songwriter with seven substantive originals here. As a lyricist, he can flash a wit worthy of Nightcat Rick Estrin. London and saxophonist Chris Burge (who joined the band about three years ago) provides sturdy original songs to the album as well.