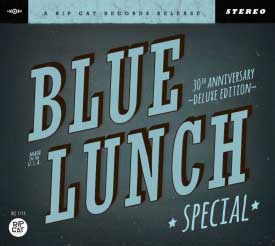 Blue Lunch, hailing from Cleveland, Ohio, now celebrating its 30th anniversary with the release of a compilation album Blue Lunch Special, belongs to a rare breed of roots bands.

Singer and guitarist Bob Frank, a band member since 1995, explains, “It’s harder to define the sound for us than anybody else. We do everything from doo-wop harmonies to close to straight-ahead jazz to the most low-down gutbucket Chicago blues. And we explore different periods of R&B (like 1940s jump-blues and 1950s New Orleans-style) but we do them all authentically.”

Singer and harmonica player Pete London, a founder of the Cleveland-based band back in 1984, adds, “To call us a blues band is accurate, but it doesn’t tell the whole story.”

Debuting on the mighty little Rip Cat label, Blue Lunch’s Blue Lunch Special collects 16 specially picked tracks from six previous band albums, spanning 15 years. The mid-1990s was when the outfit really got up to speed creatively and chops-wise, and they’ve stayed in righteous grooves ever since.