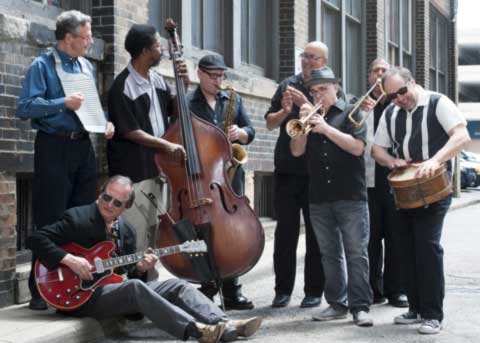 (Cleveland, OH) – It’s December 25th and neighbors and friends seem engrossed in the many holiday happenings: entertaining their in-laws, and feasting on turkey and mashed potatoes with gravy. Meanwhile, Jewish Clevelanders may find themselves stuck at home with nothing to do – maybe visit a kosher or Chinese restaurant.

But there is another option. The Blue Lunch Band will host its 10th annual Blue Lunch Holiday Latke Party and concert at 7:30 p.m. the Beachland Ballroom and Tavern (15711 Waterloo Rd., Cleveland).

Potato pancake latkes and other holiday foods will be available for purchase while the band entertains. “What’s better than food and music combined? Nothing,” band member Bob Frank said.

What makes the night special is that “the band celebrates being Jewish during Christmas, but doesn’t take themselves too seriously, so it’s a really fun night,” he said.