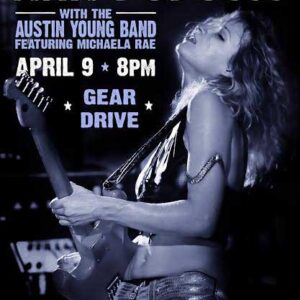 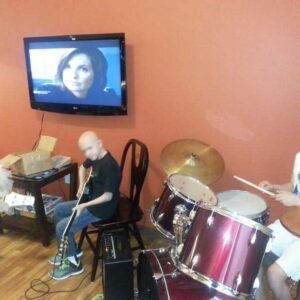 In association with the Grand County Blues Society, Blue Star Connection provides musical instruments to children and young adults facing cancer and other serious challenges. “For a child who is seriously ill, having a (musical) instrument can not only be fun, but can also help them relax, cope with their experience, talk with therapists and improve their sense of self-worth,” explains Lauren Servos, Musical Therapist at Riley Hospital for Children, past recipients of musical instruments from Blue Star Connection. Blue Star has reached hundreds of kids and donated musical gear to over 25 Children’s Hospital Music Therapy programs, as well as several other community programs.

Ana Popovic is an award-winning, hard-touring, guitar slinger blending smoking electric funk and slide guitar, jazzy instrumentals and a tight blues groove with soulful, feminine vocals. Add to the mix her incredible stage presence, all of which makes her an irresistible force in the world of contemporary blues music.

Ana Popovic was born in Belgrade, Serbia (formerly Yugoslavia) and grew up in a warm family where music was very important. All throughout her youth, her father would invite friends over for nightly jam sessions. In this atmosphere, she quickly learned her father’s impressive blues and soul record collection, grabbed his guitar and started playing at the age of fifteen. Since then, Ana has developed into a phenomenal guitarist and vocalist with a growing legion of fans throughout the world.

Austin Lee Young is a Colorado native who picked up his first guitar at age 12 and hasn’t put it down since. Self-taught, Austin churns out the blues and displays his music with an electrifying passion that defies his young age. Young engages his audience and can match any seasoned performer that currently draws large crowds. He incorporates the sheer honesty of the blues and performs it with a modern, high energy sound that remains faithful to its traditional roots. Also appearing with this band is guitarist Michaela Rae who is also Colorado-based, and has been likened to Ana Popovic due to her superb guitar playing.