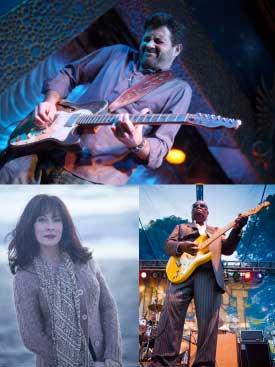 Blues lovers will be anything but blue at this year’s Gator By the Bay Festival! Happening May 8-11, 2014 at Spanish Landing Park, the festival not only features the hottest Cajun & zydeco music around, but also one of the strongest blues, jazz and swing lineups in the festival’s history, including Tab Benoit, Mark Hummel, Nick Gravenites, Johnny Vernazza, Deanna Bogart, Janiva Magness, Steve Lucky & the Rhumba Bums, and many more. There will be a full contingent of favorite local blues bands as well as some very special, one-time-only collaborations.

Kicking off the newly expanded event on Thursday, May 8 is Louisiana blues guitar legend Tab Benoit, who has chalked up three Grammy nominations, four Blues Music Award’s Entertainer of the Year titles and garnered five Contemporary Male Blues Music Awards. A founding member and driving force of Voice of the Wetlands, Tab Benoit is the real deal— a masterful musician and a true son of the Louisiana bayou who consistently plays to sold out crowds. Concert seating tickets for the special show range from $25-$75.

As he does so well, Johnny Vernazza has put together a collaboration of stellar blues musicians – Mark Hummel, Nick Gravenites, and Deanna Bogart— who will take the stage as the Johnny Vernazza Project on Saturday afternoon. Slide guitar master Johnny V has played alongside such greats as Luther Tucker, Sunnyland Slim, Chuck Berry, Steve “Guitar” Miller, Greg Allman, George Thorogood, Charlie Daniels, Commander Cody & the Lost Planet Airmen and Elvin Bishop. San Francisco Bay Area harmonica player and vocalist Mark Hummel has been in the forefront of the West Coast Blues movement with his band The Blues Survivors and has just released his 17th album. Back in the day, slide guitarist, vocalist, songwriter Nick Gravenites was a member of the iconic Paul Butterfield Blues Band alongside his Chicago buddies Mike Bloomfield, Elvin Bishop and Paul Butterfield and was also a founding member of the blues-rock-soul band Electric Flag. He continues to be a major player, appearing on some 40 albums as singer, songwriter, guitarist, and producer. Blues Music Awards’ Horn Instrumentalist of the Year for 2008, 2009, and 2010, Deanna Bogart is a bandleader, singer, songwriter, producer, pianist and sax player who combines the best of boogie-woogie, contemporary blues, country and jazz into a splendid blend she calls “blusion.” In addition to appearing with the Johnny Vernazza Project, Deanna will be performing with Sue Palmer’s ten-woman collaboration, Ladies Shoes Blues Review, also on Saturday, and with Sue Palmer and Steve Lucky in a Six Hands Boogie Woogie piano extravaganza on Sunday.

Speaking of collaborations, The Ladies Shoes Blues Review is a powerhouse 10 piece all women, all-star band performing together exclusively for Gator by the Bay, for one show only, on Saturday afternoon. Handpicked by Sue Palmer, the band is an eclectic mix of local and national talent, and includes a dynamic three person horn section and powerful lead vocals along with Sue’s signature piano boogie woogie blues. Along with Sue, the group will include: Deanna Bogart on saxophone, Carmen Getit of The Rhumba Bums on guitar and vocals, Missy Andersen on vocals, April West on trombone, Elizabeth Meeker playing trumpet, Deejha Marie, vocals, Laura Jane, vocals, Jodie Hill on bass, and Sharon Shufelt on drums.

Janiva Magness, 2013 Contemporary Blues Female Artist of the Year recipient from the Blues Foundation in Memphis TN is among the premier Blues and R&B singers around today. A charismatic performer known for her electrifying live shows, Magness is a gutsy and dynamic musical powerhouse who will be performing at the festival’s Bourbon Street Supper club on Friday evening.

Got an urge for some jump blues, swing, jazz and rare gems inspired by the 30s, 40s and 50s?  Steve Lucky & the Rhumba Bums, Featuring Miss Carmen Getit have been spreading the word, from New York City to the Montreux Jazz, from the Half Note Jazz Club in Athens, Greece to the San Francisco Blues Festival. They’ll be gracing the food court-adjacent Bourbon Street Stage on Saturday afternoon; on Sunday, Steve Lucky will join Sue Palmer and Deanna Bogart in a Six Hands Piano Boogie Woogie; and Carmen Getit will be playing guitar and singing with the Ladies Shoes Blues Review on Saturday.

You can find all ticket, schedule and other info at GatorByTheBay.com.