Blues Foundation head Sieleman to step down in 2015 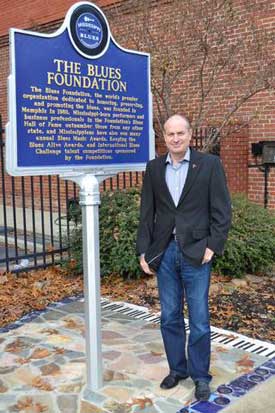 The news was announced Tuesday afternoon [Oct 28] in a news release. Sieleman, who has been at the top of the influential blues music organization since 2003, plans to step down in September of 2015. He will leave as the longest-serving executive in the foundation’s four-decade history.

Sieleman helped usher in a new period of growth, visibility and profitability for the foundation during his tenure. Over the past decade, Sieleman has dramatically expanded the annual International Blues Challenge and Blues Music Awards, strengthened relations with various member chapters and societies throughout the U.S. and abroad, and has overseen the development of a permanent Blues Music Hall of Fame, which is slated to open downtown in May.

Sieleman has been serving at the pleasure of the Blues Foundation’s 25-person board. He informed them of his intention to step down earlier this year, and made the decision official this week.

“When Jay was brought in, it was really a do-or-die situation for the foundation,” said Eric Simonsen, the chair of the foundation’s board. “Jay brought not only fiscal stability, but the programs that were in place he grew those, and put in new ones as well. The International Blues Challenge has grown leap and bounds; the Blues Music Awards have grown leaps and bounds. We now have the HART Fund, which gives money to [ailing] musicians. We have Generation Blues, which is a scholarship program for young artists. The ability to do those sorts of things has lot to do with Jay and the discipline he brought to the organization. He’s done a fantastic job.”

Sieleman said his reasons for leaving are both personal and professional. “It’s a combination of factors, as opposed to a single one,” said Sieleman. “I turn 62 next April, and I’ll start receiving my pension, so financially, I’m able to do it. But, also, with the fundraising and building and opening of the Hall of Fame coming up, I will have done about as much as I can do in the job. And I feel like it’s time for someone else to take over the reins and see what they can do.”

The Foundation’s board has formed a committee to begin the search for a replacement. “They hope to select someone no later than the first of August,” said Sieleman, who will stay on to ease the transition to the new head.

“Jay has blazed a difficult trail to follow,” said Simonsen. “That said, there is going to be someone other out there to lead us. And we hope to find a worthy successor. We’ve got a good committee to look for that person.”

Sieleman, who practiced law for more than 20 years, including internationally in Panama and the Solomon Islands, before coming to the foundation, says he’s proudest of the work he’s done to strengthen the foundation globally (the organization has members in more than 50 countries now).

“Having lived outside of the U.S., I think I was open and amenable and willing to reach out to those who lived elsewhere but who were as much blues fans as those in the U.S. And I feel that’s been a good thing for the foundation.”

Though he’ll be leaving his job, Sieleman said he plans on staying in Memphis. “I live in a condo on the river and I can walk to one of the great playgrounds in the world: FedExForum, AutoZone Park, Beale Street,” said Sieleman. “There’s a lot outside of my front door that I’ll finally have more time to enjoy.”