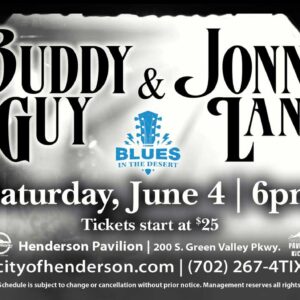 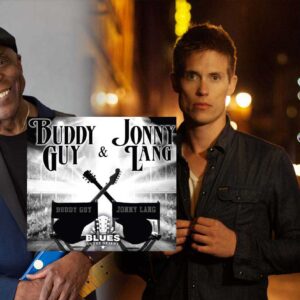 (HENDERSON, NV) – Get ready to sing the blues. The City of Henderson presents Blues in the Desert this weekend on Saturday June 4 at the Henderson Pavilion (200 S. Green Valley Parkway). The event features performances by blues guitarists Buddy Guy and Jonny Lang. Tickets start at $25.

Buddy Guy is a true blues legend. At age 79, the award-winning blues icon is a Rock and Roll Hall of Fame inductee, major guitar influence to rock titans like Jimi Hendrix, Eric Clapton and Stevie Ray Vaughan, and a pioneer of the Chicago blues. The man who Eric Clapton considers the “greatest blues guitarist ever” and who was the 2015 Grammy Lifetime Achievement Award recipient will perform music that spans over 50 years, including “Sweet Home Chicago” and songs from his most recent album Born To Play Guitar.

Sixteen years ago, at the age of 16, Jonny Lang found incredible success with the release of his debut album Lie To Me. The Grammy-winning guitarist has evolved as a writer and performer since launching his career in the 1990s. Over the years, Lang has shared the stage with such music industry superstars as B.B. King, the Rolling Stones and Aerosmith. This weekend Lang will perform hits that include his breakout song “Lie To Me” to music from his newest album Fight For My Soul.

A Fan Fest will be held at 5 p.m. and feature live music, food trucks, interactive games, merchandise and children’s activities.