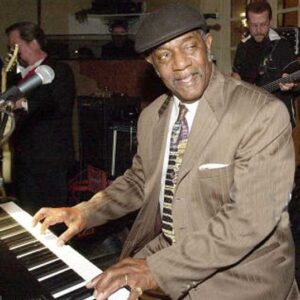 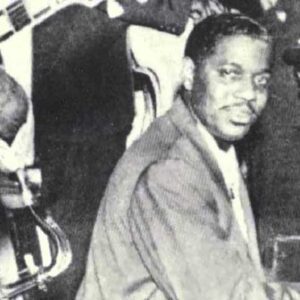 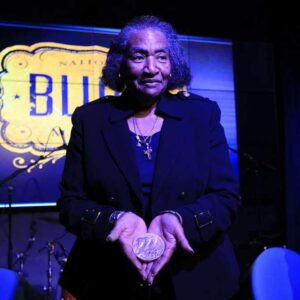 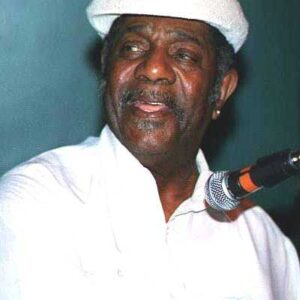 (St. Louis, MO) – Fans of blues legend Johnnie Clyde Johnson long have complained that – although a member of the Rock and Roll Hall of Fame – the native St. Louisan’s stellar musical talents were often unfairly overshadowed by others.

As U.S. Sen. Claire McCaskill put it, “He wasn’t quite as ‘showy’ as some of the other musicians he hung out with.”

His low-key nature could explain why Johnson, who died in 2005, also didn’t dwell on another significant part of his life – as a member of the Montford Point Marines, the corps’ first African-American unit. It was set up during World War II – years before the U.S. military was finally ordered desegregated by then-President Harry S Truman in 1948.

On Monday at the National Blues Museum, before a crowd of Johnson’s relatives and admirers, McCaskill formally presented the Congressional Gold Medal to Johnson’s widow, Frances Johnson.  Congress approved the medal for the Montford Point Marines in 2012, but it wasn’t until earlier this year that it was awarded to Johnson.

McCaskill says the fact that Johnson signed up for the military in 1942, soon after the war started, speaks to his character. “Johnnie Johnson signed up, not only knowing he was willing to risk his life for his country, also that he would endure what most of the Montford Point Marines endured,” she said. “A lack of recognition for their courage, not the embrace of them by their fellow Marines many times, and cruelty many times.”

Later, the senator added, “You think about a guy with that kind of talent who says, ‘I want to serve. I want to give back to my country,’ and what he had to endure to do that.”

After Monday’s ceremony, his widow observed, “He would have been very proud, very humbly proud, that’s the thing.”

During his seven-year stint in the Marines, Johnson developed some of his musical skills while in the unit’s band, Frances Johnson recalled. After he became a civilian, Johnson headed to Detroit, where he connected with other musicians – black and white – including fellow legend Chuck Berry.

McCaskill said that President Franklin Delano Roosevelt deserves credit for taking the first step to allow African-Americans to serve in the military. “This was not a decision that was a popular decision with most of the men who served in the Marine Corps,” she said. “These were not things that were done to make politicians popular. These were things that were done because it was the right thing to do.”

“This was an extraordinary man. This was a man of towering talent,’’ she said. “A man who touched people’s lives through his talent. This was a man who could speak to people in the language of music.

BB King’s Band on the Road again! Note from the Delta Blues Museum Director about deadline for matching Museums for America grant