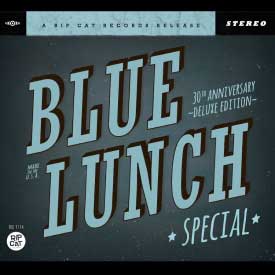 Blue Lunch, now celebrating its 30th anniversary with the release of a compilation album Blue Lunch Special, belongs to a rare breed of roots bands. Singer and guitarist Bob Frank, a band member since 1995, explains, “It’s harder to define the sound for us than anybody else. We do everything from doo-wop harmonies to close to straight-ahead jazz to the most low-down gutbucket Chicago blues. And we explore different periods of r&b [like 1940s jump-blues and 1950s New Orleans-style] but we do them all authentically.” Singer and harmonica player Pete London, a founder of the Cleveland-based band back in 1984, adds, “To call us a blues band is accurate, but it doesn’t tell the whole story.”

Debuting on the mighty little Rip Cat label, Blue Lunch’s Blue Lunch Special collects 16 specially picked tracks from six previous band albums, spanning 15 years. The mid-1990s was when the outfit really got up to speed creatively and chops-wise, and they’ve stayed in righteous grooves ever since. Bob Frank’s wryly engaging composition “Cold Day Down Below” looks to Professor Longhair’s New Orleans, and, to note another gem from the early-2000s, London’s horns-fueled instrumental “The Fidget,” which demands jitter-buggin’ dance-floor activity. The Midwesterners also crackle with sparks of artistic maturity and invention on five numbers recorded for the Sideswiped album of 2011. The anthology’s most recent track, “Tenor Madness,” (from 2012’s Saxophone Shootout II) finds current band saxman Chris Burge getting wild-eyed with two former Blue Lunch tenor players, Keith McKelley and Tony Koussa. No matter the key or tempo, or calendar date, a passionate authenticity informs the music made by from these Clevelanders.

Acclaimed by Ohio’s largest newspaper, The Plain Dealer, and by Blues Revue and Jazz & Blues Report, Blue Lunch has appeared at several leading roots events (the Pittsburgh Blues Festival, for one) and, in fact, even performed at the 2004 Presidential Inaugural Ball. They had the privilege of performing with their now-deceased mentor-friend-neighbor Lockwood (the compilation includes a fine bare-bones cover of the great bluesman’s “Little Boy Blue”), as well as soul-blues giant Little Milton on his last stop in Cleveland. Blue Lunch, too, has crossed paths with Muddy Waters Band pianist Pinetop Perkins and many other luminaries. Early in 2014, the guys are working top Midwestern clubs with lauded blues ladies Candye Kane, Laura Chavez and Long Tall Deb. A second Rip Cat release is in the works. Bob Frank promises more great music, “Our sound’s totally evolved, and it’s evolving still.”