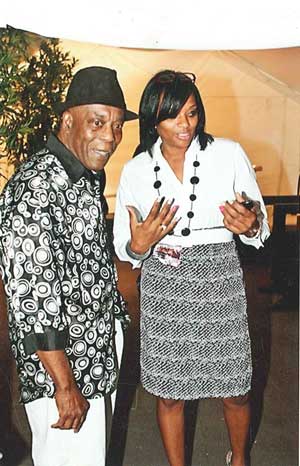 How many times has the Jazz world saluted the marvelous late, great Frank Sinatra? In the same fashion, the Blues Schools Program would like to salute first and foremost, Buddy Guy, my father Roy Gaines, my uncle Grady Gaines, Eric Clapton, Hubert Laws, Herbie Hancock, Carlos Santana, Eric Gales, Gary Clark Jr., Bonnie Raitt, and also the late greats such as Muddy Waters, Willie Dixon, Howlin’ Wolf, Frank Sinatra, Bobby Blue Bland, and the King of Blues B.B. King in the Blues for being the most accessible entertainers, and for the historical way these artists put their signature stamp on music, indelibly pressed into the public awareness.

Let’s chat about the charming and legendary Buddy Guy who just won a Grammy for Best Blues Album (Born To Play Guitar), What did Buddy Guy talk about during his Grammy interview on the Red Carpet?

“It means a lot,” Buddy Guy said. “There are so many great, talented people out their now. If you are fortunate enough and lucky enough to be nominated for something, it’s special because a lot of my friends who are no longer with us anymore, should have these awards. Every award that I have ever received, I received in honor of Muddy Waters, Howlin’ Wolf, Willie Dixon and of course, the late great B.B. King is where I learned all my lessons from. I listened and I tried to improve upon what they were doing. I did not learn any of it from a book. I can’t read music. They have all walked in some good mud and have left some good tracks.” Blues crooner Guy said, ”At least, I know the blues is not dead.” 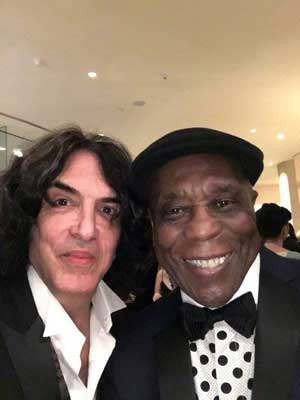 My uncle, Grady Gaines, rock n’ roll saxophonist said, ”I think he’s one of the greatest guitarists and blues singers about, and I put him next to B.B. King. There’s no doubt that Buddy came through the blues.”

Bobby Rush, who received a Best Blues Album Grammy Award nomination back in February 2014 for his CD, Down in Louisiana, stated, ”I think it’s a great win for Buddy Guy to win a Grammy for Best Blues Album. He earned everything that’s coming to him. Buddy put the time in and he’s a good person. I define him as a good blues man. Guy is my friend and I would like to see him win again and again. I love the man. He worked hard for a good album and I wish him well now and with all the things he’s got coming! There’s only a few of us left, Bobby Rush, Roy Gaines and Buddy Guy! Congratulations Buddy! You are the best…a very talented man and I love you man!”

Buddy’s guitar player, Ric Jazz Hall said, ”Well Deserved! A lot of history, stress and disappointment behind BG, a legend getting his Grammy and I wish Buddy Guy more success and hope he gets more Grammy’s. Buddy is the last original blues man. Buddy and your father Roy Gaines are the pioneers (CG) who opened doors for us.” 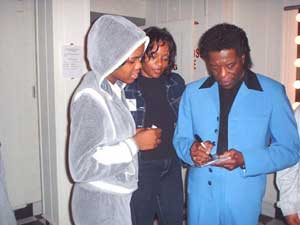 Guitar Shorty had just got off the airplane and said, ”Well, he had it coming and well deserved! Many more than that! I hope, I am next while I’m alive.”

Legendary Rhythm & Blues Cruise co-founder and promoter Roger Naber said, ”Carolyn and I were on a flight from Spain on American Airline’s and the music channel’s number one add was Buddy Guy. Out of Top #10 on Amazon.com, Buddy Guy also had 3 or 4 songs for download. He has gotten a lot of airplay of his new record, Born To Play Guitar, and I don’t know of any other artist so diverse for blues record’s changing tones. Buddy Guy put out a great record with producer Tom Hambridge. It came as no surprise that Buddy won the Grammy for an excellent record.”

Hubert Laws-Jazz Classical Flutist said, ”I was first exposed to Rhythm & Blues from a honky tonk across the street from where I was living as a child. Later, I was exposed to the same form of music from some acquaintances of mine, Roy Gaines and Grady Gaines, two people in the Blues genre who later became my two favorites.” 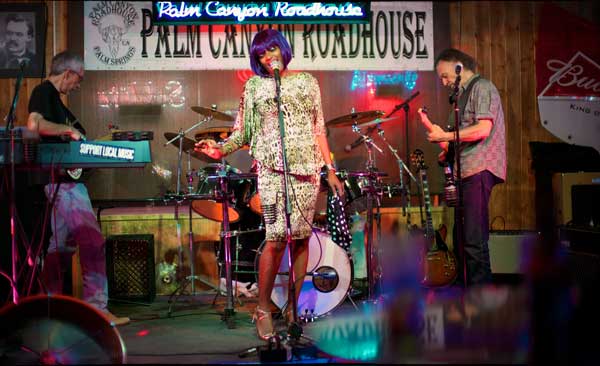 Dr. Carolyn “Blues Singer” Gaines said, “Buddy Guy, a well-designed ‘Blues Phantom Rolls-Royce,’ who wasn’t on the showroom floor, but on stage holding the only real woman who understood him…his guitar, and singing the blues with the sounds of Bobby Blue Bland, Muddy Waters and the late greats, the king of Blues, B.B. King, Willie Dixon, and Howlin’ Wolf.  All of these sounds combined became Guy’s very own original. (Don’t forget Buddy’s, mom and the Polka Dots!). Well-deserved Grammy Winner, Phantom Rolls-Royce of the Blues, Buddy Guy. Just as Guy said in his hit book, ”When I Left Home…”I Got To Go Now!’