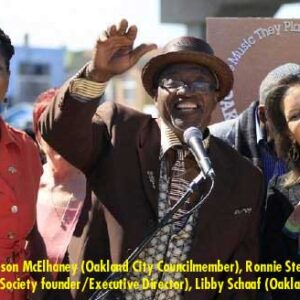 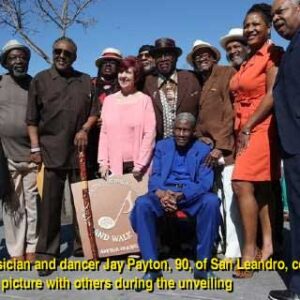 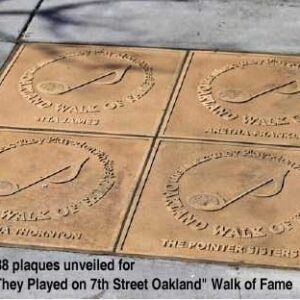 OAKLAND, CA – Once dubbed West Coast’s Harlem because of its vibrant blues music scene, Seventh Street in West Oakland was where the greatest names in the blues performed in the 1940s through the 1980s.

In honor of that rich history, the Bay Area Blues Society and city dignitaries on Friday unveiled a Walk of Fame that commemorates the blues, gospel and jazz artists who graced long shuttered clubs such as Esther’s Orbit Room and Slim Jenkins Supper Club.

“The Music They Played on 7th Street Oakland” Walk of Fame lines the Seventh Street sidewalk in front of the West Oakland BART station and features 88 plaques of honorees, including Aretha Franklin, Ike and Tina Turner, the Pointer Sisters, B.B. King, John Lee Hooker and Ray Charles. Funding has already been secured for another 120 plaques that will be installed at Seventh and Wood streets, the site of the former Slim Jenkins Supper Club.

“West Oakland was the gateway for so many people who came from the South seeking a better opportunity,” West Oakland City Councilwoman Lynette Gibson McElhaney said at the unveiling Friday.

“Seventh Street used to be a thriving business district, a commercial district, a place where African-Americans had so much pride,” she said. “So when things started shifting, Esther’s was the last little piece of something for so long.”

Esther Brown died in 2010 at age 90 and is one of 25-30 honorees who died over the 25 years it took to get the Walk of Fame to fruition, said Bay Area Blues Society Executive Director Ronnie Stewart, who spearheaded the project.

“She was a major, major reason we created this project. She played a key role in the development of Seventh Street,” Stewart said. “I think it kept her living the last two to three years of her life.”

Stewart, who had prostate cancer last year, said, “Sometimes I never thought I’d be standing there to look at it in the ground. It’s unbelievable, absolutely, unequivocally unbelievable.”

The Bay Area Blues Society is now writing grant applications and trying to generate support for a West Coast Blues Hall of Fame center that would feature performance space, room for classes, a library and a recording studio.

“Hopefully, these plaques will encourage people to get behind the project,” said Charles Blatcher III, director of the National Minority Military Museum Foundation.