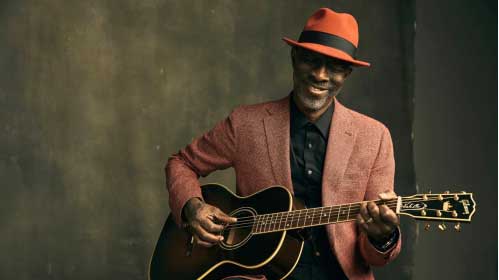 Leave it to a bluesman to summon a sobering portrait of the holidays.

The slice of blue Yule in question comes from the Grammy-winning Keb’ Mo’, who released a seasonal album in October called Moonlight, Mistletoe & You. The title suggests wintry warmth and romance. For the most, the record delivers just that. What greets you initially, however, is a jazzy blast of “Bah, Hambug” entitled “Christmas is Annoying.” The music is full of the kind of cheery flourish one might expect from a marque artist this time of year while the vocals practically skate along the song’s seasonal sheen. Then you get to the lyrics, a deflating realization that holiday wonderment from the singer’s youth has been dashed by relentless commercialism, maxed-out credit cards and a general sense of unyielding stress.

“Let’s apologize to Jesus for what went wrong,” Mo’ sings as the holiday spirit sags. You can practically see the record label board room dismay upon hearing such a popular and bankable artist open a new holiday album by singing, “It’s time to wrap this season up and leave it all behind.” Ho ho ho, indeed.

The rest of Moonlight, Mistletoe & You isn’t so playfully bleak. No sooner does “Christmas is Annoying” wind up than Mo’ slides into the string-savvy bliss of the album’s title tune, complete with a serene solo by veteran pop-jazz saxophonist Gerald Albright. Similarly, ‘70s and ‘80s hitmaker Melissa Manchester duets with Mo’ on a warm and fuzzy take on the Irving Berlin staple “I’ve Got My Love to Keep Me Warm.”

The acoustic shuffle “Santa Claus Blues” is about as close as Mo’ gets to his blues roots on the album (“Santa Claus is a good man and he rides the evening train”).” Elsewhere, “Moonlight, Mistletoe & You” is an invitingly lush recording that supplies a sly sense of holiday cheer, despite its dour opening.